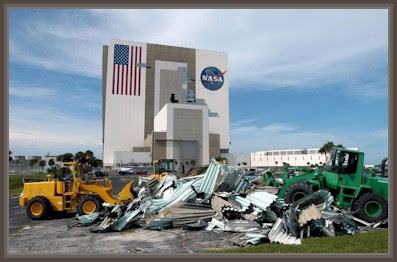 The legendary Vehicle Assembly Building (VAB) at KSC
endured it's worst natural battering at the hands of
Hurricane Frances in 2004.

Forecasters may call for a relatively mild Hurricane Season in 2009, but no threat to NASA's long-term planning can compare to the annual tug of war federal budget fight in Congress.

"This is the second year we will join forces with our coalition partners like the California Space Authority to address space issues on a federal level," noted Space Florida President Steve Kohler. "Our united work is vital to ensuring the U.S. develops competitively in the global space marketplace."

Topics to Include ITAR Reform and U.S. private participation in the International Space Station past 2005.

The faltering economy threatens to disrupt plans to retire the U.S. space-shuttle fleet next year and free up funds to develop a new generation of manned spacecraft.

With Florida and parts of Texas particularly hard hit by the recession, their congressional delegations are maneuvering to stave off thousands of additional layoffs there by delaying shuttle retirements.

Concerns about adding to local unemployment rolls recently prompted Democratic Sen. Bill Nelson of Florida to put language into a budget bill providing an extra $2.5 billion that could keep the shuttles flying through 2011. A House-Senate conference committee is considering the matter, even though officials at the National Aeronautics and Space Administration are pushing to end the program a year earlier.

The crux of the problem is that NASA can't afford to keep the orbiter going and also accelerate work on its next family of multibillion-dollar rockets and exploration vehicles. NASA managers worry that extending the 1980s-vintage shuttles past 2010 poses significant safety problems. They also believe such a step would preclude robust funding of replacement systems, and likely end up lengthening the currently projected five-year gap between the final shuttle mission and the anticipated maiden flight of its replacement.
Read the Article HERE.
And the Congressional Budget Office (CBO) lays it on thick with it's normal agenda-driven "non-partisan" two-billion penny's worth in a NASA annual assessment Report (pdf), HERE.
Posted by Joel Raupe at 6:41 AM