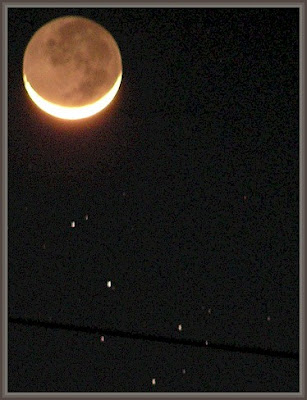 70 minutes after local sunset, two-thirds of Sunday evening's Grand Conjunction of Moon, Mercury (just out of view to the lower right) with the Pleiades between them. North is upper right.
(Joel Raupe, hand-held Olympus C-740 63mm-1:3.7 3 sec.)
The clouds were non-existent, aside from the distinct horizon coloring after sunset confirming suspicions of volcanic dust and aerosols aloft, a wide width of continent away from Mt. Redoubt and under-reported eruptions elsewhere. The trim-thumbnail moon that showed itself first, and even after ea

rthshine came into its own a brief exposure time was needed to bring out the midnight over the Nearside impact basins.

Mercury was about as high as it gets as an evening star. An hour earlier, immediately after sunset, the Moon in binoculars showed a libration favoring the southeastern limb as the terminator crawled westward over Mare Undarum, mere hours before the Crises circle comes into view.

A companion attributed the orange over-exposure of the sunrise hovering over Mare Marginis to the sodium glow, the high altitude dust and generally anything other than an operator using minimal equipment. Nice of them, but the five-year old Olympus has no sodium line filter, unlike today's cellphone cameras.
Posted by Joel Raupe at 2:55 AM