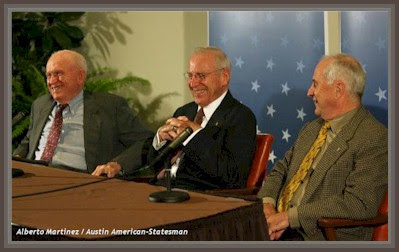 It was a rare opportunity for Apollo 8 Commander Frank Borman, Jim Lovell and Bill Anders to discuss their landmark first manned mission to attain Earth's escape velocity, enter orbit around another gravity well and return to Earth.

Jimmie Collins of the Austin American-Statesman filed an after-the-fact report, Friday, on the reunion of the Apollo 8 crew and "about thirty" members of its ground-support team at the LBJ Library and Museum, part of the yearlong celebration of the 40th Anniversary of the landing of Apollo 11 (not yet the "50th" as the American-Statesman headlined on its website) in July 1969. 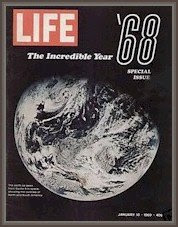 trans-lunar travel, the first of ten manned missions to the Moon's vicinity, and among these six lunar landings and surface science and sampling missions before the end of 1972.

Captain Lovell, 81, would afterwards, in April 1970, command Apollo 13, and was thus fated to travel to the Moon twice, each time without a landing, was not optimistic,about a return to the Moon soon, Collins writes.
"As for the future of the space program, Lovell said he thinks there is less support for returning to the moon and that he doesn't think a human will step foot on Mars in his lifetime or the next generation's."

It is difficult now to fully understand the world-wide impact Apollo 8, as seen from Earth over the Christmas holidays at the end of the politically-turbulent and very violent 1968; soon afterward eclipsed by Apollo 11's mission achievement only seven months later.

Yet that impact was very real at that particular moment in history, in the minds of many.

The famous earthrise picture taken by Bill Anders has become an icon of the Apollo Era but it also put a previous year of turmoil in immediate perspective.

It had been, Life magazine headlined, "The Incredible Year." 1968 witnessed the assassinations of Dr. Martin Luther King, Jr. and Senator Robert F. Kennedy, and it was also the most violent year of the Viet Nam War for the United States.

Over the Christmas holidays those Best Wishes addressed to "all of you on the Good Earth...from the crew of Apollo 8," marked by televised images Live from the Moon and featuring the never-before-experienced sight of lunar craters zipping by 100 kilometers below, in grainy black and white CCD images on millions of televisions put many years of cultural upheaval inside a far larger frame of reference.
-
The Article HERE.
Posted by Joel Raupe at 5:15 PM