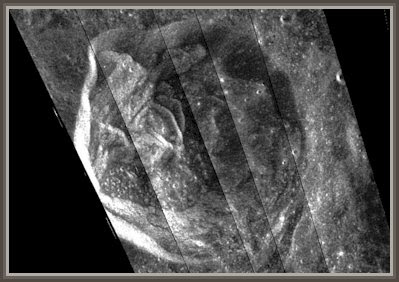 Rozhdestvensky K, near the north pole of the Moon
Air and Space - Smithsonian - Paul Spudis

"The initial images look very clean, with a few collection artifacts and some missed orbits. Some of the mosaics have mismatched, offset features, not because of any fault in the instrument but because we still do not have a precise global cartographic control net for the Moon, a missing data set that will be filled by the mapping currently taking place by Chandrayaan, the Japanese Kaguya, the Chinese Chang’E and soon, the American Lunar Reconnaissance Orbiter missions. Much of the shadowed terrain covered by Mini-SAR shows a surface much like the surface of the Moon not in shadow, with small craters of a variety of shapes and sizes present. Some images show spectacular surface features, including wall slumping, central peaks and flat, smooth floors."

Read Paul Spudis' report for Smithsonian HERE.
Posted by Joel Raupe at 1:02 AM