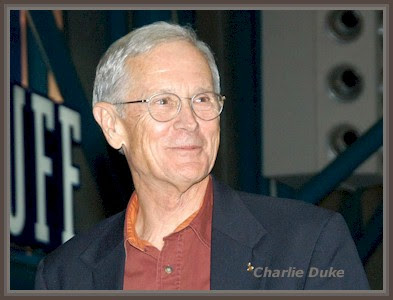 As reported last month, Charlie Duke told the story of his experience as lunar module pilot on Apollo 16 at Texas State University in San Marcos, this week. I couldn't be there, as I had keenly wanted, unfortunately, but Sean Wardwell, managing editor of NewsStreamz.com in San Marcos did attend, and filed a better than average story on the moonwalker's lecture.
Almost exactly thirty-seven years after exploring the Cayley plain between North Ray and South Ray Crater, and along the northwestern rim of Descartes Formation at Stone Mountain, along with Captain John Young, Charles Duke came to San Marcos, Monday, and said, "I'm a story teller."

"And what a story he had to tell," Wardwell wrote.
Read the historic account HERE.
Posted by Joel Raupe at 8:06 PM