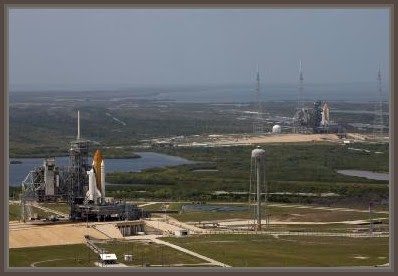 Once again, the "once in a lifetime" opportunity presented last September of seeing two Space Shuttles, Atlantis and Endeavour, deployed for launch at the same time is seen at Kennedy Space Center. It speaks well of the skillful personnel at the Cape, but also speaks volumes of what the U.S. has been forced to recognize about the limitations of our Space Shuttle.

After an incredible logistical ballet following Hurricane Ike, and after the Hubble Space Telescope encountered unforeseeable mechanical problems before a reluctant repair mission could be launched, the remaining STS timeline was juggled.

Easy to say, but difficult to trace out in a flowchart. The mighty crawlers originally built to move Apollo-Saturn stacks from the massive Vehicle Assembly Building out to Pad 39 have had quite a workout moving Space Shuttle missions outside the VAB, back in and back out again, back and forth with remarkable care and skill at KSC.
The thirty-year-old Shuttle program has taught us all many things only historians in the future may be able to properly chronicle. Engineers, scientists, even bureaucrats and politicians have had an opportunity to learn realities they might otherwise have never discovered.

Though the program never delivered on its original selling points of convenience, cost, safety or reliability the future seen in 1971 was characterized by twin shuttle deployments as a common occurrence. Still, the Shuttle has delivered to us a range of lessons at least as complicated as the machine itself.
It is with safety in mind that Endeavour once again stands ready to launch as hopefully a very low-probability rescue mission (STS-400) for the crew of Atlantis, set to perform one final HST repair mission (STS-125) in May.

After the loss of Columbia in 2003 it was decided the Shuttle would never again be launched into an orbit that made emergency rendezvous with the International Space Station beyond the range of the fuel needed for such an orbital alignment of plain and altitude.
Without a second Shuttle programed and dedicated for a possible rescue mission and because the orbital inclination of ISS is 51 degrees from the equator this decision effectively put any Shuttle mission not specifically dedicated to ISS out of bounds.

Launch from KSC to rendezvous with ISS requires either a launch to the north-northeast along the eastern seaboard of the United States or south-southeast over the Caribbean Sea and western South Atlantic. Both insertion angles require more energy than a launch toward the due east which takes fuller advantage of Earth's rotational speed of more than 300 meters per second at the latitude of Cape Canaveral.
The plain of the ecliptic, where the orbital plains of Earth and Moon, and most of the Solar System, are all between 48 degrees north and south of the equator. Missions are most efficiently launched eastward and into alignment with the orbits of these other destinations.

Deploying Hubble high over tropical latitudes near the equator also allowed uninterupted exposures for images anywhere in both the northern and southern skies.

Another concern for ISS is the South Atlantic Anomaly, a lower-than-average warp in the Van Allen belts, ionizing radiation trapped along Earth's magnetic field lines and mostly above Low Earth Orbit. You can see it designated as the SAA on NASA mission control mission maps, and at its much high orbital inclination ISS must travel through this area for minutes at a time during four or five of 15.5 daily orbits.

ISS was constructed in a high orbital inclination to accommodate our Russian partners' higher latitude launch facilities, when persuading them to de-orbit Mir and to instead refit the Zvezda module for installation as what is now the Russian section of the station.
Hubble, like Columbia on its final trip, was launched eastward from Cape Kennedy within the hold of Discovery nineteen years ago this month, on April 25, 1990, seven years later than original planned. Aside from the amazing corrections resolving its improperly ground mirror, which was immediately diagnosed upon First Light, Hubble has also been repaired, renewed and highly upgraded during four intense and high flying Shuttle servicing missions in 1993, 1997, 1999 and 2002.

This coming fifth servicing mission to Hubble was originally scrubbed because of dangers known to be inherent in the Shuttle's design, terribly confirmed by Columbia (which was also the last Shuttle to rendezvous with HST in 2002). Popular sentiment for the remarkable Hubble prevailed and billions have now been spent on this final rendezvous to keep the aging but still unique vehicle working for more years to come.

May's capture and repair of Hubble is not without dangers other than the obvious post-Columbia.

While the mission will be performed in Hubble's much less inclined orbital plain, it again takes the Shuttle more than 200 kilometers higher than ISS.

Its higher orbit keeps Hubble stationed 559 kilometers over Earth, while latest information shows ISS orbiting between 347 and 358 kilometers. Yet, because the ISS orbits closer to Earth's rarefied upper atmosphere the Shuttle faces a high probability of encountering debris in general and particularly debris from the Cosmos and Iridium collision in February.

NASA has reportedly calculated odds of an impact from debris on STS-125 at 1/185, outside the 1/200 flight protocol limits. But flight planners have waved this limit for this last exceptional Space Shuttle mission.

More problematic is the present weakness in the interplanetary magnetic field, resulting from what is believed to be the deepest and longest minimum in solar activity in more than a century.

The hull of the Space Shuttle is an effective shield from a weak solar wind and even Coronal Mass Ejections, though these last can occur at any point in the solar cycle.

But not cosmic rays, made of both very heavy and medium weight elemental particles, like iron or aluminum, stripped of electrons and ranging from medium to super energy levels, traveling near the speed of light.

The best protection against these interstellar bullets is under the blanket of Earth's atmosphere. Earth's magnetic field does bend and sometime deflect lower-energy cosmic rays but their high speed prevents the highest energy particles from changing course in time to prevent an impact on machines and personnel in Space.

On the Moon it is estimated a full 15 meters of lunar regolith would be need to be shoveled over a habitation to provide the same levels of protection human take for granted at sea level on Earth.

Far from protecting astronauts, the hull of spacecraft merely breaks apart the most energetic cosmic rays into a cone of secondary particles, a choice between being shot point blank with a pistol or with a shot gun from across the room.

The best protection astronauts have, interestingly, is an active local star. The resulting interplanetary magnetic field at its most energetic protects the inner Solar System from fully half of this interstellar radiation.

Cosmic rays are more rare than solar wind and, far more dangerous Coronal Mass Ejections, but the incidence of cosmic rays is twice than at Solar Max a few years ago.

A trip to the inside edge of of Earth's trapped radiation belts, low likelihood of solar activity and even a doubled incidence of cosmic rays over a short trip, even to the Moon, does not put the STS-125 crew outside NASA's standards. A trip to Mars, however, using present technology is certain to exceed those standards, putting Mars-treking astronauts just beyond the 4/100 chance of dying of radiation exposure over their remaining projected lifespan.

The Space Shuttle, as the most complicated machine ever built represents a true high water mark, using 1970's era avionics and spacecraft design. But our present technology is known to be insufficient to handle the known hazards of what might be accomplished in coming decades.

Far beyond just new booster designs or newer long-term goals and exciting new spacecraft, crossing those very real roadblocks is an uncelebrated plan at the heart of the long-overdue Constellation program. The Space Shuttle program definitely stands in the way.

The sight of twin Shuttles being readied on Pad 39 may once have represented that program's promise, but today it represents its limitations.
Posted by Joel Raupe at 7:49 PM