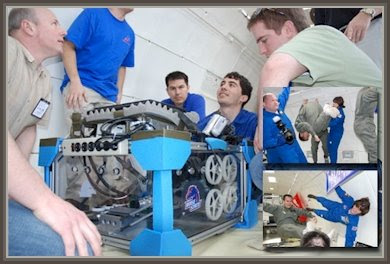 Boise State students and faculty from the College of Engineering took off this morning as participants in NASA’s Microgravity University program. In a specially outfitted Boeing 727, the research team is conducting an experiment over the course of several hours and 32 extreme parabolic maneuvers simulating Martian, lunar and zero gravity. The data they are collecting concerning lunar surface traction concepts for rovers will contribute to NASA’s vision of returning to the moon and establishing a permanent platform for exploring far beyond. | more

KTVB-TV - BSU/COE : A new generation is helping NASA return to the Moon -- this time to set up a more permanent presence. Those forward thinkers include students selected from Boise State University College of Engineering.

Elite groups of college students to an ultimate test -- a trip into weightlessness in the name of NASA research.Among those students, for the first time ever, is a team from Boise State University -- its project selected along with those from just 11 other universities.

For the past several months, the engineers-in-the-making have been collaborating on a unique challenge -- reinventing the wheel for an out of this world application. The KTVB Story HERE.