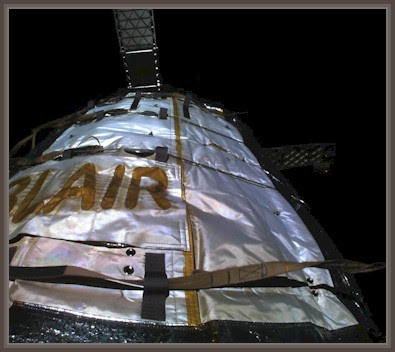 Genesis II, the second prototype expandable space habitat launched by Bigelow Aerospace on June 28, 2007, has completed its 10,000th orbit around the Earth. Following the first spacecraft Genesis I, this unmanned vehicle demonstrates the continued development of future space stations technologies.

Orbiting 665 days and having traveled close to 270 million miles, Genesis II has been busy transmitting pressure, temperature and radiation data to the mission operations staff in Las Vegas. We are also conducting long term testing of systems such as lighting, air circulation, and pressure monitoring systems. In addition, the expanded camera configuration has provided over 51,000 images consisting of the inside of the spacecraft, the external micro-meteoroid shielding, and the Earth. New images are downloaded weekly and can be seen HERE.

Genesis II was inserted into the same orbit as Genesis I. However, due to natural orbital decay, Genesis II is currently at a slightly higher altitude. Based on lifetime estimates, Genesis II and Genesis I will be in orbit for many more years. Check out the tracking page to find out when the satellite will be passing over your part of the world.
-Bigelow Aerospace
Posted by Joel Raupe at 1:33 AM