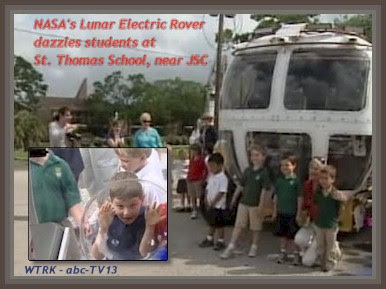 HOUSTON (KTRK) - By Kevin Quinn - Students at a Houston-area elementary school had a visitor that could soon be out of this world.

NASA's Lunar Rover stopped by St. Thomas the Apostle Episcopal School in Nassau Bay Wednesday to bring the students' studies to life. The pressurized vehicle has a cabin that astronauts could theoretically live in for up to two weeks at a time while conducting research on the moon's surface.

"We really think hard about things being redundant, so that if something breaks another system can take over," NASA's Lucien Junkin told the students.

The rover was a big hit among the kids who especially liked the spacesuit mounted on the vehicle. Designed to let astronauts slip into it quickly, the suit would stop crews from having to endure hours of pressurization first.

"I think this is really cool how NASA can build something like this," said student Ian Graham.