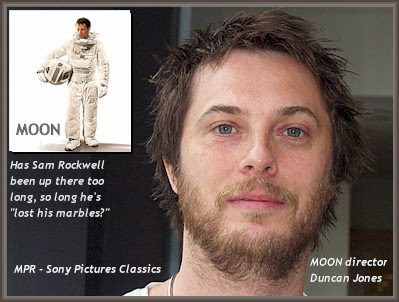 No, it's not "the sequel to Silent Running, though many are saying that 1972 film staring Bruce Dern most reminds them of Duncan Jones' MOON starring Sam Rockwell and premiering in selected theaters.

Moon is also not to be confused with "New Moon," the PG-13 'tween thriller' and sequel to Twilight, the romantic vampire-opera now in production in British Columbia.

Beginning a North American publicity tour ahead of the full premier, Jones is interviewed by Minnesota Public Radio and can be heard through the embedded player, talking about his new film staring indie perennial Sam Rockwell.

Moon, about an isolated Helium-3 miner at the end of his three-year contract on the Moon is forced to face... himself.

I can't wait to see this movie. I hope it's a big success. I've read interviews with Duncan and he seems very charming and witty, like his dad.