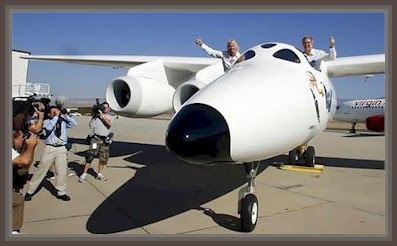 To celebrate her 60th birthday, neither a European holiday nor an African safari was exciting enough for Glenys Ambe.

Instead, she's booked to go to space.

Ms Ambe, 53, is the first Australian to buy a ticket on Virgin Galactic - Richard Branson's commercial space travel project - through a travel agent.

"I have always wanted to go up in space," she said. "The only day I wagged school in my whole life was when my father gave me permission ... the day they walked on the moon.

"I never thought [being able to go to space] would happen in my lifetime ... it's a dream and now I've got this dream that's coming true."

But for those without the money, her experience will be as follows:

At a custom-built spaceport in New Mexico, Ms Ambe will be strapped into her seat on spacecraft SpaceShipTwo, which is attached to a specially-designed jet aircraft carrier.

The aircraft carrier will take off and in 45 minutes rise to 15,000 metres, when it will release the spacecraft.

In an instant, Ms Ambe will endure six G-forces for 90 seconds, as rockets propel the spacecraft vertically through the Earth's atmosphere.

"You are instantly pinned back into your seat, overwhelmed but enthralled by the howl of the rocket motor and eye-watering acceleration," Virgin Galactic says on its website.

The sky, visible through large windows, will quickly change from blue, to mauve, indigo and finally black, and then there will be silence, as the rocket motors are switched off.

At a peak altitude of 110 kilometres, Ms Ambe will now experience weightlessness. She will be free to unbuckle her seatbelt, float about the craft and and view the Earth and outer space from a window.

After four minutes Ms Ambe will return to her seat, and will soon feel the G-forces again as the craft re-enters the atmosphere, and then glides 45 minutes to land at the spaceport again.

The entire trip will be about two hours
Read the Article HERE.
Posted by Joel Raupe at 5:23 AM