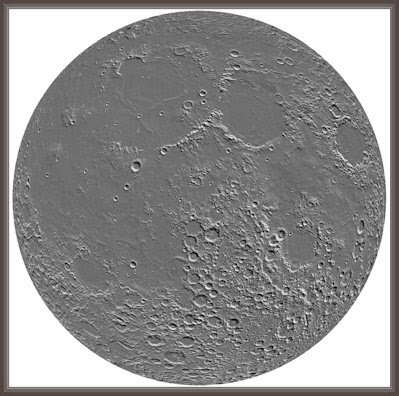 As his contribution for Wednesday, April 9, Chuck Wood, proprietor extraordinaire of the indispensable Lunar Picture of the Day (LPOD) brought to our attention yet another premier presentation first appearing on the Japanese language side of JAXA's Kaguya Picture Gallery. He entitled the large black and white rendering of the Moon's Near Side (which must be seen to be believed), "The Best Image Map of the Moon."
When Chuck Wood makes such a claim, as one of the few who knows all such a claim implies, pause to take notice. I did and was not disappointed. His full version of the above second deciphering of data from Kaguya's Terrain Camera is posted here. Reduced down to less than 400 px for this modest blogspot just does not do it justice.
It will eventually appear on the English language side of the Kaguya Picture Gallery of course, but that could be a week or more from now. The patient and alert follower of the Kaguya official image releases, now numbering nearly 400 (not including the videos) has known for some time the necessity JAXA labors under requires attention to public image releases in proper turn. It's only natural JAXA would update the Japanese side of the Gallery first.
Fortunately, we have Chuck Wood's network, including JAXA investigator Juna Terazono kind enough to alert the world when Kaguya science goes public, in Japanese first, with a new spectacular result.
From that site, it is easy and well worth it to download and take a gander at the latest revision to the Kaguya lunar topography, and you can easily do that here.
Because this is an appreciable update of the laser topography of both lunar hemispheres release in February, and accounting for the recent announcement from Kaguya project manager Yoshisada Takizawa that Kaguya was now operating an extended mission at much lower altitude in preparation for de-orbit later this year, Chuck indicates we can look forward to even greater improvements to this LIDAR topography as Kaguya carries on its data mining even as it maps crustal magnetic anomalies with the highest precision yet. Kaguya de-orbit and impact are presently slated no earlier than September.
Sources LPOD & JAXA
Posted by Joel Raupe at 8:51 PM