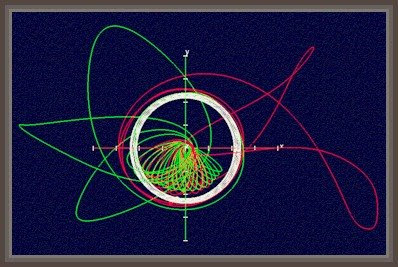 THEMIS P1 (TH-B) in red and P2 (TH-C) orbit between this summer's orbit raise maneuvers and October 2010 when they will capture the Lagrange points between Earth and Moon. After six months in these orbits, P1 and P2 will be inserted into Lunar orbits where they will make measurements of the Lunar warke, the magnetotail, and solar wind through September 2012. See Larger Image HERE.

THEMIS will continue with five probes, saving two by sending them on a long and important detour through Earth-Moon Lagrange points to equatorial lunar orbit.

Sometime in May final approval should be given to save two of the five co-orbiting satellites in the successful THEMIS constellation by diverting these to Earth-Moon Lagrange points and eventually into lunar orbit for a 17 month stay.

Needed study of the lunar exosphere and of the Moon's wake within the solar wind and within the magnetotail of Earth will be added to THEMIS exceptional primary mission in a challenging and complex set of orbital manuvers.

ARTEMIS will become a distinct component of THEMIS and its ongoing continuing study of the solar wind and its complex interactions with Earth's magnetosphere, as an expected sharp increase in solar activity as Solar Cycle 24 gets underway, while also gathering a unique and needed dataset in vicinity of the Moon prior to extended human activity.

THEMIS (Time History of Events and Macroscale Interactions during Substorms) should be expanded to include ARTEMIS (Acceleration, Reconnection Turbulence and Electrodynamics of Moon's Interaction with the Sun).

In planning for THEMIS at the University of California at Berkeley, principal investigator V. Angelopoulos and his team knew they would have a problem soon after their primary mission was accomplished. If the P1 and P2 satellites in the five probe constellation were not adjusted in their orbits. It was announced March 20 that the THEMIS primary mission had been completed. Each of the five probes remain in excellent health.

Nevertheless, because of their initial orbital configurations, P1 and P2 are eventually headed into extended periods in Earth's shadow, and outside their solar battery's recharging design range. That initial orbital configuration was obviously necessary because the five probes set in motion a vast opportunity to gather data and make new discoveries, documented in at least 30 papers.

The new "ARTEMIS component" of THEMIS will begin an ascent toward the Moon beginning late 2009, and the basic five vehicle mission will be able to continue. As the ARTEMIS component is manuvered through the Earth-Moon Lagrange points, and eventually into lunar orbit, study can begin strongly complementing the Lunar Reconnaissance Orbiter and LADEE missions.

The complex orbital manuver will take nearly two years, but will enabling THEMIS to continue it's baseline mission without the loss of two of the five probes. (See diagram, page 29 of the Proposal submitted by the THEMIS team last summer, HERE.) 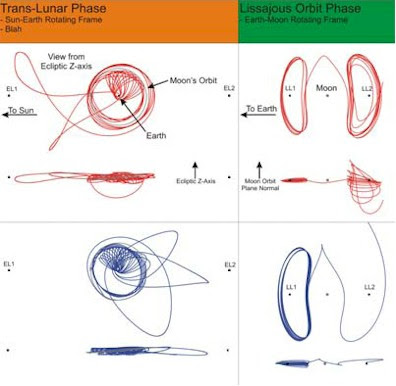 On Feb 24, 2009 ARTEMIS passed its mini-Confirmation review at (Goddard Space Flight Center). Therefore, the road has been cleared for the upcoming mission implementation. There will be a delta (pico) review in early May to ensure progress with contingency planning is adequate, but we don't anticipate any problems. Congratulations to the implementation teams at UCB, JPL and GSFC for their outstanding progress to-date!

The essence of the comments of the review board was that the ARTEMIS team has done an outstanding job, especially considering the little (8 months) time that has passed since the Senior Review go-ahead. Of course, it was recognized that there is still a lot of work ahead, but the team yesterday presented a reasonable, viable plan, which conveys confidence they can deliver. Even though this is a challenging project, given the resources and time available, this condition was deemed acceptable considering that the THEMIS probes are already operating well and this is an extended-phase mission. The reviewers have come up with less than a handful of requests for action, which I am certain will strengthen the project, as it moves towards the Orbit Raise Maneuvers in the upcoming summer. Tentatively the ORMs start July 9th.
Please find the extended THEMIS proposal HERE.
Please find the Senior Review report HERE.
Posted by Joel Raupe at 1:26 AM