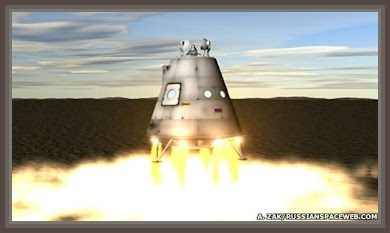 From RussianSpaceWeb.com via BBC, notional glimpse
of renovated Russian Soyuz terminal descent
cushioned by rockets and footpads
From Anatoly Zak (via BBC) Engineers are considering a rocket-powered landing system for the successor to Russia's Soyuz spacecraft.

If accepted, it would be the first time in history that a manned vehicle relied solely on rocket engines for touchdown.

Previous manned missions have landed on Earth using a parachute or, in the case of space shuttles, a pair of wings.

RKK Energia, Russia's prime developer of manned spacecraft, had to examine the feasibility of the rocket-powered landing as a result of conflicting requirements for the project set by the Russian government.

Currently, Russian cosmonauts are carried into orbit on the three-seat Soyuz capsule. Russia is developing the new craft as a replacement to this venerable spacecraft, which has been in service for more than four decades.

The Soyuz does use small solid propellant motors to soften its touchdown, but the ship's parachute plays the main role in providing the vehicle and crew with a safe landing.

New launch site: In 2007, Moscow took the momentous decision to build a new launch site in the nation's far east, hoping to end Russia's dependency on the spaceport in Baikonur, which, after the collapse of the Soviet Union, ended up in the newly independent republic of Kazakhstan.

The new site, which has been dubbed Vostochny, or simply "Eastern", will be located almost as far south as Baikonur - an important orbital mechanics factor which determines the cargo-carrying capacity of rockets.

(Increasing the cargo capacity even more would result from the Russian - ESA partnership calling for a devoted Russian launch facility on the equator at Kourou.)
Posted by Joel Raupe at 5:31 PM