On to the Moon… 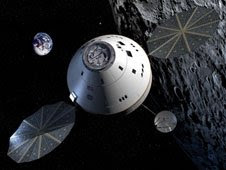 My earliest childhood memory is of being called inside by my mother on a warm summer day to watch Buzz Aldrin and Neil Armstrong walk on the Moon. I’m not sure if it was a live or recorded programme I saw 40 years ago — I suppose it doesn’t really matter, but I would like to think that I watched history unfold.

Then, three years later, Eugene Cernan stepped back into his Apollo 17 lander and no-one has set foot on the Moon since.

This morning on BBC Radio 4’s Today news magazine, there was a discussion about NASA’s Orion Spacecraft — a full-sized replica of which has just gone on display in the Mall in Washington DC.

Orion is expected to carry humans to the International Space Station in 2015 and to the Moon in 2020. Further in the future, Orion could carry astronauts to Mars.

You can listen to the discussion here . Unfortunately the BBC has not posted this piece as an excerpt so you will have to listen to about the first 50 minutes of the show — unless you can work out a way to fast-forward to about 06:53.

I’m guessing that many at NASA are looking forward to Orion with a mix of anticipation and dread. What will happen to the US space programme if the nation fails to revisit the Moon, let alone Mars? Failure could come from a lack of money — or more ominously, a lack of collective will to overcome what remains a significant technological challenge.