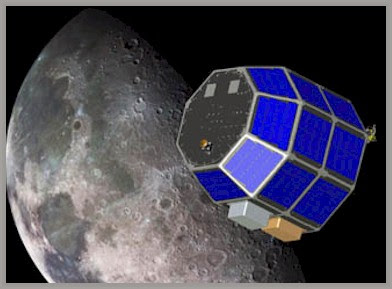 The mission remains listed on the NASA Science Directorate's website as still "under study" but its mission, along with the International Lunar Network, are considered vital follow-up missions to the Lunar Reconnaissance Orbiter and LCROSS now impactor scheduled for launch on the same booster in early June.

The LADEE Science Definition Team made a report on the goals of the mission in May 2008 to NASA's Science Directorate, recommending the NASA launch LADEE as a single payload with less weight restrictions.

Out-year budget planning has been moving up fast, but preliminary designs called for LADEE to share a its ride with GRAIL, the mission to map the Moon's lumpy gravity field. The LADEE Science Definition Team made a strong case, however, for LADEE being most likely to succeed in its sensitive science mission if constructed slightly outside the weight restrictions needed to share its Atlas-Centaur with GRAIL.

Today's news has also fueled a rumor that data returned over the past year by Japan's Kaguya sub-satellite gravity survey may have made JPL's GRAIL mission unnecessary.

Understanding the dynamics of the Moon's dusty exosphere, believed to consist of a solar-charge-driven and levitated wave of exceedingly fine sub-micron-sized dust particles thought to continuously following the Moon's terminator, and acted upon further by the Moon's monthly encounter with the Earth's magnetic field, is considered to be a very important "early" mission.

Lunar Dust mitigation and study by NASA has been rated most highly in follow-up assessment s of agency's progress in returning to the Moon, but also lacking needed progress. Just one difficulty in discovering the true dynamics of the dusty lunar exosphere is sensitive instrumentation. Theory has exceeded intrumentation. Though it is believed some charged dust is levitated on ballistic paths higher than 100 kilometers, such particles are microscopic.

The Science Definition Team has set a course for LADEE that coincides with the complex positioning needed to sense dust in motion, but the planning is almost based entirely on theory. The best data the mission is built upon are observations made prior to orbital sunrise during the Apollo Era, a solar wind experiment showing instead fast moving "winds" of dust performed on the surface and famous nighttime photographs of horizon glow returned by Surveyor 7 forty years ago.

Mitigating the hazards to personnel and equipment presented by the presence, apparently everywhere on the surface of the Moon, of lunar dust has made the 140 kilo LADEE mission important "before extended human activity" on the Moon can begin, according to the Science Definition Team chair Laurie Leshin of NASA Goddard.

The National Academy of Sciences influential "Scientific Context for the Exploration of the Moon (2007)" cited the unknown hazards to explorers, well-remembered by the Apollo pioneers, and also a need to study the lunar exosphere "while still in a relatively pristine state."

Assessing conditions on the surface has always presented an unexpected set of frustrations in the history of lunar exploration. In November 1969 Pete Conrad and Alan Bean landed roughtly 170 meters from the landing site of Surveyor 3, southwest of Copernicus. Retrieval and careful study on Earth of artifacts from the robotic lander revealed most, if not all weathering that could be discovered after more than 20 months on the lunar surface had been the result of the arrival of Apollo 12.

It is now generally accepted that the original decompression of the Apollo 11 Lunar Module Eagle added around 5 percent to the total gaseous element of the lunar exosphere. The arrival (and departure) of all powered soft landings on the Moon are now known to have propelled at least some microscopic dust to escape velocities.

The choice of Wallops Island adds to a rich history as an original home for America's Atlantic Missile Range, prior to the move to Cape Canaveral fifty years ago. NASA's facility on Virginia's Eastern Shore has been home since then to almost continuous sub-orbital sounding rocket experiments, to study, among other things, dynamics of Earth's atmosphere.

Like California, Florida, New Mexico and elsewhere Virginia's state government has been enacting tax breaks and doing what it can to attract future sub-orbital space tourism and commercial launch work to the Eastern Shore.
The Mid-Atlantic Regional Spaceport, immediately adjacent to Wallops Island, is part of a tax break and incentives-driven commitment that has drawn, and its most famous tenant Orbital Sciences Corporation.

NASA recently announced its robotic ATV ISS orbiting resupply program will be a publicly-funded private affair, awarding eight ISS resupply missions to Orbital Sciences' Cygnus ATV and twelve to the SpaceX Dragon, totaling twenty ATV ISS resupply flights after the retirement of the Space Shuttle in late 2010.
While SpaceX, on its fourth attempt, managed to orbit a small payload from Kwajalein, near the equator, and is readying its heavier Falcon 9 booster for a test flight from Kennedy Space Center, Orbital Science has yet to launch its five stage Minotaur V booster. Nevertheless, using boosters like the L-1011 wing-launched Pegasus, Orbital has launched 55 payloads into orbit since 1990.
Posted by Joel Raupe at 2:40 AM