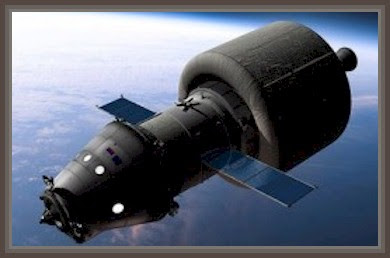 Prospective Piloted Transport System (PPTS)
The Russians, as reported last week, have finally revealed plans for new spacecraft for manned lunar exploration. After the collapse of the Soviet Union in 1991, junked parts of a lunar lander the USSR once hoped to get to the Moon before the United States came to light.

After the failure of the Soviet's version of the U.S. Saturn V heavy-lift booster, and the accelerated budget and timetable of NASA, succeeding in landing Apollo on the Moon before 1970, the Soviets engaged a second generation of impressive lunar rovers and sampling probes in a program unmatched to this day, even if its usefulness remained debatable. The program ended in 1976.

Russia has long announced its ambitions to resume lunar exploration in the 21st century, but have been short on specific vehicle plans. Confirming artist's impressions of the PPTS represents a departure from improvements to the forty-year-old dependable Soyuz design.

Recent announcements of joint efforts with both India and of new launch facilities at Kourou, hosted by the European Space Agency may eventually dovetail Russian's lunar ambitions into those of the ESA and ISRO. Launching from the high latitude of Baikonur puts the Russians at as serious a disadvantage as having few ice-free sea ports.

The United States hopes to return to the Moon with the Constellation program, landing the Altair lander on the Moon before 2020. Recently, China and India have also expressed an interest in homegrown lunar programs, and both India and Russia have cited the availability of Helium-3, mostly in nearside maria, as a possible goal to fuel economic growth beyond 2050.

Meanwhile, budget plans passed by the Democrat Party in the U.S. have made no secret of hopes of deferring the cost of a "semi-permanent" lunar station near Shakelton Crater and the lunar South Pole with more international involvement, stemming off hoped-for success in building the precursor robotic International Lunar Network before 2015.

Depending on geo-politics over the course of the coming decade, two or three international efforts may eventually be in competition for the honor and, perhaps more importantly, the resources of Earth's Moon.
Posted by Joel Raupe at 6:59 PM