Moon base not 'abandoned' 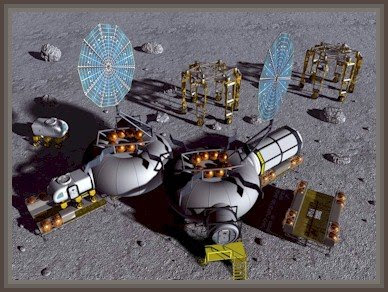 Congress and the President might one day, even soon, decide to abandon the long-term national goal of setting up a manned station on the Moon, but such a change in policy did not happen, nor was it remotely hinted at, today.

Nothing in Soclese's testimony before a U.S. House committee was inconsistent with present law or NASA policy.

"As NASA works toward the establishment of a lunar outpost, NASA shall make no plans that would require a lunar outpost to be occupied to maintain its viability. Any such outpost shall be operable as a human-tended facility capable of remote or autonomous operation for extended periods."

Reports that NASA, "instead of building a permanent lunar base, may instead send astronauts on short sorties, or excursions," are more than a year overdue.

This language was included in original mark-up language in the House sub-committee when the U.S. House started the ball rolling on the President's budget request for NASA 11 months ago.

Added in committee, passed by both House and Senate and signed by the President, this must be one of the most under-reported stories of 2008, with regard to national space policy.

The United States formally instructed NASA to plan for an eventual Lunar outpost that could remain unmanned, for indeterminate periods of time last year, just as Scolese alluded to in his testimony April 29.

Only writers living outside the context of present long-term space policy could accuse Scolese or NASA Associate Administrator for Exploration Systems Doug Cooke, of providing "vague answers" to questions from congressional committee Members.

The clarifying changes made to NASA's long-term manned exploration strategy last year, eliminating design planning for a permanently manned lunar outpost appears to be one of the most fundamentally under-reported stories of 2008.

For example, almost nowhere will you find the following, which like the sentence above, also appeared in the earliest mark-ups of this year's operating budget for NASA:

(b) DESIGNATION.—The United States portion of the first human-tended outpost established on the surface of the Moon shall be designated the ‘‘Neil A. Armstrong Lunar Outpost’’.

Or the following, understood in context and as context, could explain some of awards NASA made in support of ISS re-supply missions a few weeks later:

(c) SENSE OF CONGRESS.—It is the sense of Congress that NASA should make use of commercial services to the maximum extent practicable in support of its lunar outpost activities.
Reporters who want to decypher happenings within NASA should remember, under the law, the agency is very much "a creature of Congress." Presidents come and go, but Congress has the power of the purse, most especially the U.S. House of Representatives, where all spending plans must begin.
Posted by Joel Raupe at 2:15 AM

Yeah, I thought this was overblown, good to see someone else catching the fact that nothing is 'abandoned' or even unusual here :)

Great sight, Nick. I'd been meaning to tell you that, but life's too short, or something...

But you have a quality site, truly. - JCR