LRO as vital precursor to survival on the Moon 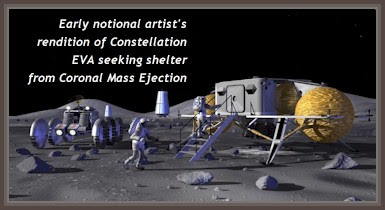 After holding our breath for the better part of the past four decades, the original Lunar Pioneer Research Group anxiously awaits the successful launch of the Lunar Reconnaissance Orbiter, our appetite's whetted by the work of LOIRP and the methodical work of NASA and countless scientists preparing for "extended human activity on the Moon."

As we've endorsed on more than one occasion, the Lunar Precursor Robotics Program is properly deemed essential if what we know about the place of importance the Moon must have in Human destiny will ever to become more widely known. On this issue, at least, we are in full agreement with the National Academy's Space Studies Board.

Those who feel as we do, that a commitment to lunar exploration holds a central role in the ultimate survival of civilization, would do well to take the little time needed to download and read the seminal report issued by the Academy, The Scientific Context for the Exploration of the Moon (2007).

Understanding the progress, advances and delays NASA is making in long-term planning and development (a difficult undertaking for any federal agency necessarily dependent on Congress) seems divided between those who have read this report and those who have not.

In the short-term, from inside the high-pressure stream of snippets issuing 24/7 from PhysOrg.com is a brief report on LRO and its place in the long-term goal of doing the kind of important science in a wide variety of fields on the Moon that 5,000 individuals regularly carry out in the almost equally inhospitable Antarctica.

That PhysOrg.com snippet can be read HERE.
Posted by Joel Raupe at 10:51 PM