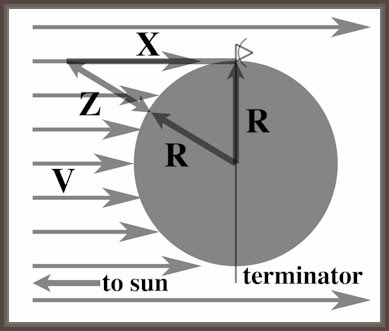 The dusty moon and the Solar Wind, (Fig. 3 from "Neutral Solar Wind Generated by Lunar Exospheric Dust at the Terminator, Collier and Stubbs (2008).

NASA's progress with R&D deemed vital prior to "extended human activity on the Moon," as explicitly detailed by the Space Studies Board in 2007, was recently graded in a point by point follow-up progress report. Among these "mitigation of the lunar dust hazard" to personnel and equipment was given the highest marks for the work methods but a low grade for progress made.

Far from being the jagged surreal landscape pictured in early artist's renderings before the Space Age, the lunar surface close-up turned out to be surprisingly smooth, the hills rounded and the Ground Truth very, very dusty. Since the Apollo Era the Moon's history has turned out to be one of continuous bombardment, by objects large and small. Seemingly without weather or tectonics, and immensely old, the Moon may be the Rosetta Stone to unlocking the history of the Solar System.

From the standpoint of machine and Human visitor, however, the steady micro-bombardment of basaltic lava fields and anorthositic Highlands over billions of years has resulted in a surface covered with hyper-fine rock that literally gets into everything, including the ear nose and throat.

It is abrasive and sticky, in the micro-electrostatic sense, and presents a big road block to progress in lunar exploration. More than a dangerous and hazardous nuisance, scientists believe extended human activity may disrupt or cloud what lessons might be learned from the dust while still in "a pristine state." The long-term changes and day-to-day hazards of living in the inner solar system, particularly that part where the Earth spends its time, can't be easily discovered on or near the Earth. But the Moon is a perfect laboratory for this and other studies.

Senator Harrison Schmitt, twelfth and last to set foot on the Moon in 1972, notes the immediate surface of the Moon is "overturned roughly every twenty million years." Mixed with Solar Wind, heavy and light cosmic rays, magnetic plasmas, meteors, etc. its now generally accepted that some of the lighter microscopic dust particles pick up sufficient electrostatic charge from the solar wind to repel away from the surface to heights as high as orbiting spacecraft.

Among the great unknowns, as this dusty wavefront follows the terminator around the Moon's surface, are its true extent and if this dynamic process alters standards used to measure the age of larger lunar features.

Immediately below, is news of a study accepted for publication by Geophysical Research Letters, of the American Geophysical Union (AGU.) In his new study, Brian O'Brien "analyzed the behavior of dust on horizontal and vertical solar cells in one of the Apollo dust-detecting experiments. On the first morning of the experiment, the lunar module – 130 meters (426 feet) away from the dust detector – took off from the Moon's surface. The blast of exhaust gases completely cleansed a dusty horizontal solar cell, because it was illuminated only by weak early-morning light and thus the adhesive force of dust was faint. But only half the dust covering the vertical cell was removed by the blast, because its surface faced east – into more intense sunlight– and thus the sticky forces were stronger."

A quick tour of the 16mm films of each manned lunar landing, as shot through the starboard triangular pilot window, shows why Apollo astronauts quickly learned to expect to see a fan of dust from the descent stage about 40 meters above their landing site. It is now understood some of this dust was actually blown off the Moon entirely, to escape velocity.

An interesting exception was the landing of Apollo 17, where Dr. Schmitt excitedly confirms "very little dust" being kicked up until much closer to the surface. Interestingly, this longest and last field expedition is remembered for the experiences of Captain Gene Cernan and Senator Schmidt with the affect of lunar dust, inside and outside the ascent stage cabin, and also for their direct detection of fast-moving lateral "winds" of lunar dust by an experiment designed to measure Solar Wind.

A dusty Moon seemed to be a problem earlier dismissed after Neil Armstrong did not need his contingency tether to pull himself from a kind of lunar quick sand that many believed he might encounter when making that first Small Step. But as these missions demonstrated, the Moon is, indeed a very dusty place, not unlike the ground on Earth following the collapse of a pyroclastic cloud.

Studies abound on this (large or small) migration, as well as the dangerous mechanical and health hazards of lunar dust as a pressing and official central problem for engineers and planetary scientists alike.

The former want working methods of exploring the Moon while the latter is concerned with at least one very compelling reason for studying the Moon in the first place.
Posted by Joel Raupe at 11:35 PM