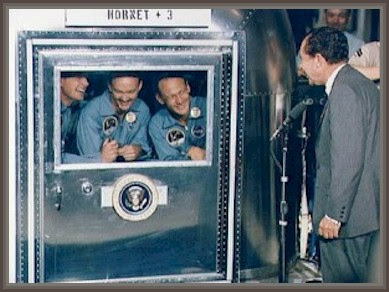 Orange County Register SCIENCEDUDE Gary Robbins - "The Richard Nixon Library and Birthplace Foundation in Yorba Linda is sketching out plans to host a retrospective and celebration of the Apollo moon landings, historic events made posssible, in part, by thousands of aerospace workers across Orange County.

"The date and details of the retrospective have yet to be worked out. But Sandy Quinn, a spokesman for the Library, says the exhibit will commemorate the 40th anniversary of the first moon landing, which occurred on July 20, 1969 when Apollo 11 astronauts Neil Armstrong and future Laguna Beach resident Buzz Aldrin touched down in the moon’s dry Sea of Tranquility."