Space start-ups may get liability break in Texas 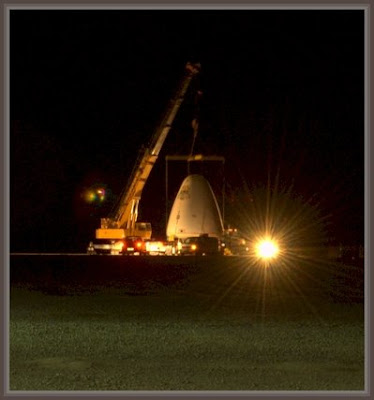 The Texas State Legislature may enact liability protection for private spacecraft testing during its present session. This will come as welcome news to Blue Origin, the start-up owned and operated by Amazon.com founder Jeff Bezos.

Headquartered near Seattle, Bezos is continuing an "incremental approach" to developing the New Shepard Program, a VTOL sub-orbital system for eventual operation at their facility in West Texas.

And fresh from winning stage one of NASA's Lunar Lander competition in October, Armadillo Aerospace experienced a set-back in February as they build on successes with novel methane -fueled VTOL power plants of their own, in preparation for stage two, later this year.

A fully-fueled test vehicle was "trashed," the company reported Feb. 11, as they continue to move computer-operated fuel valve technology and fully fueled distinctive designs from paper to testing.

Liability protection, if enacted in Texas, will be good news to Armadillo founder John Carmack, who also co-founded id Software, creators of the DOOM and Quake computer games.

Hat Tip to Eric Engleman at TechFlash of Seattle.
Posted by Joel Raupe at 11:42 AM

John Carmack... hmmm. If he sets up on Mars, I wonder if he's thought of a name for his company.

I'm sure he'll think of something.