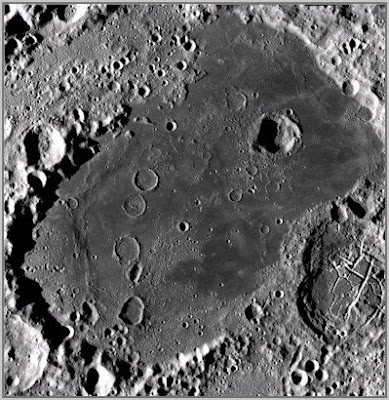 Although Charles Wood at LPOD was first to give us heads up on Japan's spectacular Kaguya Terrain Camera tour of Mare Moscoviense (Sea of Moscow), Juna Terazono can be credited with being the first to officially notify us about its existance, in an Email sent out to the "Lunatics" on the Lunar-L, Sunday, February 8.

The reduced image accompanying this post, as spectacular as it might seem, does no justice whatsoever, either to the still image or the MPEG that is available for full screen downloading, unzipping and full screen viewing immediately, from the Japanese language side of the newly renovated Kaguya Image Gallery.

Fortunately for those who make a daily stop at LPOD, Charles Wood let us in on the update on December 10. From that LPOD posting, you can immediately be treated to a larger version of the image here, and, trust me, it's worth it. Charles Wood also provide his own unique background at the LPOD site, into this "window into the interior of the Moon," where Japan's investigators have found signs of "relatively" recent lunar morphology, particularly volcanism.

The Kaguya Terrain Camera MPEG is available HERE, Juna reminds us, "Please click the "MPEG-2" button to download the ZIP archived video. Like other movies," those hung up on "some platforms, (may) experience some difficulties in playing" the MPEG.

I experienced no difficulties, whatsoever, except the need to keep my tongue off my chin, as I was taken downward, into the image here, for a slow flyover of the submerged craters lined up in
the lower left, a swing around Titov Crater and around the rim, again slowly, to finally end up with a detail look into the rectilinear formation just to the right. If the latter had been imaged alone and presented to me as a holy place of the Navaho, I would have probably believed it.

My only twiddling disappointment was in noting my best attempts to identify any distinct Swirl Albedo formations was frustrated by the prominent rim shadowing the mare "sea floor" at the upper left of the formation. The best candidates fall directly inside that shadow.

Regardless of your level of familiarity with lunar cratering, volcanism, domes, lava tubes, "sea" formation, or of the Moon as a whole, this being a very exceptional formation for the Far Side, characterized by bright anorthositic highland craters, like those seen between the seas on the Earth-facing Near Side, you are bound to enjoy this tour.

I hope this is just a taste of the kinds of materials made possible by the collected Kaguya data long after the probe is de-orbited later this year.
Posted by Joel Raupe at 1:26 AM