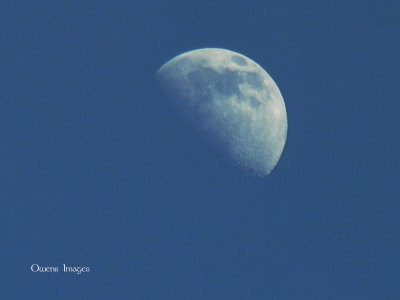 Far from me to try and compete with my hero Charles A. Wood and his essential Lunar Picture of the Day (LPOD), the site where I both begin and end nearly every day, nevertheless I stumbled on this daylight snap taken perhaps a day past First Quarter, as featured on the kewlpicsbycarol blog maintained by the talented Carol Owens.

"John shot this one this afternoon," Carol writes, "Turned out quite interesting."

I'll say. It's rare that the near-color contrast between Tranquillitatis and Serenitatis or what might be the Descartes albedo. John might have have been shooting east Wednesday perhaps at the same instant I was setting for what turned out to be a very windy and cold pre-midnight series of superior viewing of the apparently fast-moving terminator from Plato to Malapert. More likely, his shot was taken in that direction under similar conditions half a world away.

In over 700 posting over the past year, I've rarely posted a shot like this, for personal or purely aesthetic reasons. Perhaps I should more often.
Posted by Joel Raupe at 8:01 AM