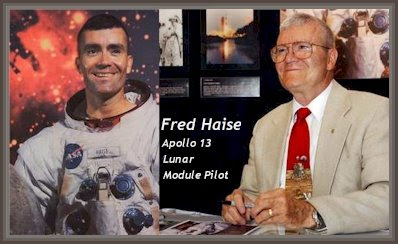 His first job was delivering The Daily Herald, the predecessor to the Sun Herald, on his bicycle and then on a motor scooter.

He later became a cub reporter and when he graduated from Biloxi High School at 16, he went to what is now the Perkinston campus of Mississippi Gulf Coast Community College to become a journalist.

Rather than risk being drafted during the Korean War, he enlisted to continue his studies and became a pilot instead of a reporter — a career move that changed the course of his life and thrust him into the national spotlight.

At 36, when he was supposed to be the sixth man to walk on the moon, the world watched as he and his fellow Apollo 13 astronauts, James Lovell and John Swigert, using ingenuity and slide rules, figured how to get their ailing spacecraft safely home. Their story was made into a popular movie, “Apollo 13,” starring Bill Paxton as Haise. “I didn’t look at myself as a public figure,” said Haise, who was awarded the Presidential Medal for Freedom in 1970 and was inducted into the Aerospace Walk of Honor.

He will talk about some of his experiences tonight during this year’s first program in the Issues + Answers Lecture Series, sponsored by USM Gulf Coast College of Science and Technology and the Sun Herald. Admission is free.

A month after his Apollo 13 mission in May 1970, Haise was welcomed home to Biloxi with one of the biggest parades in the city’s history and a ceremony to rename Church Street where he lived to Haise Street.

Three years later, he had a second brush with fate while flying a World War II airplane used in the movie “Tora, Tora, Tora.” The engine quit and on landing the plane flipped. Haise was burned over 70 percent of his body. He wouldn’t let doctors put in any metal pins or plates so he could continue to fly.

He did fly again, becoming the first to fly the space shuttle Enterprise off the back of a Boeing 747 airplane and land it safely.

“I didn’t just fly the Enterprise,” he said, but was involved in the design and development of the space shuttle.

After retiring from NASA, he was vice president of space programs at Grumman Aerospace Corporation.

“Some people look at it as I had trouble holding a job,” he joked about his career.

Haise said that it didn’t seem that incredible that a Biloxi boy was on his way to the moon. “It was just another step in that trail in my aviation experience,” he said.

Today, Haise lives in Houston with his wife, Patt, and has a second home in Gautier. He is a board member of the Infinity Science Center and a fundraising campaign — $2 Our Hero — was named in his honor to raise the $4 million that is still needed to build the center in Hancock County.

While he’s on the Coast, Haise will attend three fundraising events for Infinity and one in Hattiesburg for the Boy Scouts’ Pine Burr Council.

“As a boy, I was in the Pine Burr Council Troop 212, Dan Beard Patrol in Biloxi,” said Haise. “My scoutmaster was E.P. Wilkes, the original founder of the Biloxi/Gulfport Daily Herald.”

He never forgot where he came from and Haise anticipates he will see many people he knows in the crowd tonight.

The university invites speakers who have a unique look at different subjects, said USM spokesperson Charmaine Williams Schermund. Haise will share his vision for the nation’s space program and the impact the industry has had on the quality of American life.
Posted by Joel Raupe at 8:34 PM