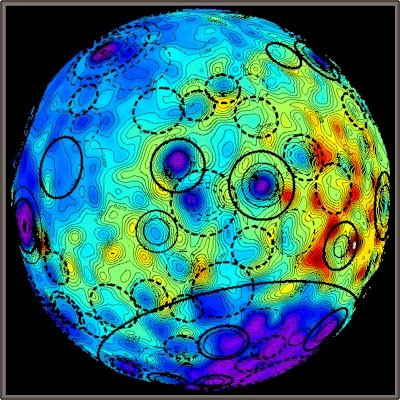 "The total number of lunar basins greater than 300 kilometers in diameter may exceed 150, more than 3 times that determined by photogeologic mapping alone," and without the Unified Lunar Control Network 2005 (ULCN 2005) topography.

Frey's findings have been published ahead of a scheduled presentation at the 40th Annual Lunar and Planetary Science Conference meeting in March (Abstract 1687).
Posted by Joel Raupe at 4:04 AM

Thanks for bringing this abstract to light! Where did the term "crytomare" come from?

Off the top of my head, Delia, "cryptomare" may have originated to explain "dark halo" craters, relatively fresh craters that should be bright (more reflective of light because they are rougher) that have excavated much darker hidden material under the surface, proved later to be the darker material common to the Seas (mare), but buried under eons of ejecta from elsewhere on the Moon. The newer craters show what "lies beneath the surface.

Since, as the authors point out, there are a number of other ways to identify otherwise hidden basins, these have also come to be called "cryptomare," and the name fits.

As to whom was first to use the phrase... I'll take a guess and say it was Don Wilhelms, author of the 1987 Geology of the Moon.

Chuck Wood over at LPOD might correct me, however.