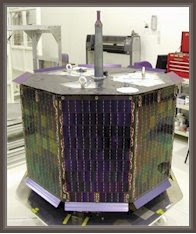 Junya Terazono, an investigator at JAXA, confirms by Email this evening (tomorrow morning in Japan) that, just as JAXA flight controllers anticipated, R-SAT "Okina," one of two subsatellites that accompanied lunar orbiter Kaguya has been "de-orbited," and allowed to impact the Far Side February 12 after having performed an exceptionally memorable role in Japan's highly successful Kaguya mission since its arrival in lunar orbit in December 2007.
Accompanying Kaguya, Okina with its sister sub-satellite acting as a radio source, greatly contributed data assisting JAXA investigators to determining the Moon's center and shape, as well as providing very highly accurate measurements of the Moon's gravimetric anomalies, or Mascons, all with unprecedented precision. Okina contributed as a central part of a four-way doppler relay of data from Kaguya and its sister V-RAD sub-satellite within an equally well-choreographed dance of ground stations on Earth.

Kaguya has completed its nominal primary mission and will have its orbit now reduced in altitude in two stages, first primarily to map the Moon's lunar magnetic anomalies, finally being de-orbited later this year.

R-SAT highlights from Kaguya Image Gallery HERE.
Posted by Joel Raupe at 1:16 AM