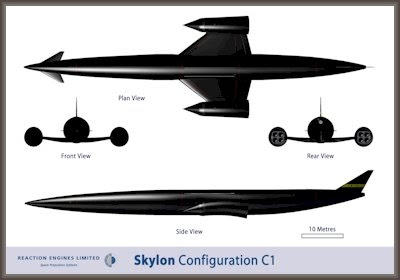 The notion of a truly reusable Single-Stage-To-Orbit "spaceplane" enjoyed by millions in the remarkable OrbiterSim simulation engine released by Dr. Martin Schweiger is one step closer to reality. The European Space Agency and British government have given official support to the "revolutionary propulsion technology" designed by UK-based Reaction Engines LTD .

REL has been awarded a one million euro contract by ESA for “Experimental Investigation of Key Technologies for a Turbine Based Combined Airbreather Rocket Engine." The ESA contract contributes towards a total program of almost £6 million.

ESA’s funding for the project is provided via subscriptions by the British National Space Centre partnership with two technology programs of the ESA – the Technology Research Programme (TRP) and the General Support Technology Programme (GSTP).

"The British National Space Centre (BNSC) is at the heart of UK efforts to explore and exploit space. BNSC is a partnership of seven Government Departments, two Research Councils, the Met Office and the Technology Strategy Board. It coordinates UK civil space activities and represents the UK at the European Space Agency," according to the REL press release.

More on the SKYLON and SABRE HERE.
Posted by Joel Raupe at 2:32 PM