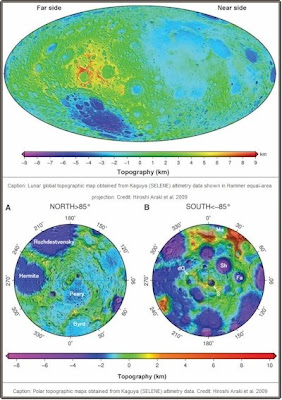 "The Japanese lunar explorer KAGUYA (SELENE) has been operating since nominal operations started in December 2007 to elucidate the origin and evolution of the Moon. Four KAGUYA research reports using observation data from the Terrain Camera onboard the KAGUYA and a perspective titled "Seeing the Missing Half" were published as part of a KAGUYA special edition in Science Magazine dated February 13, 2009.

This special edition, which is featured on the cover page, is epoch-making and succeeds the special issues of planetoid explorer "HAYABUSA" in June 2006 and the solar observation satellite "HINODE" in December 2007.

The titles of the research reports in Science magazine that aim to provide new knowledge to stimulate the study of the origin and evolution of the Moon are as follows:

* The relay satellite "OKINA (RSTAR)" made an impact on the lunar surface on February 12, 2009 (JST), and the four-way Doppler measurement mission was successfully completed.

Though it would be wrong to underestimate the value of the final and most detailed Laser Altimetry data picked up by Kaguya, or their unprecedented accuracy within a very well -planned and executed primary mission all the millions of datapoints from that experiment has been published but the analysis published in Science is being picked up by sources everywhere as "news" that Earth's Moon is a "waterless" place.

What was news, of course, in 1999 was the possibility there might be water ice deposited on the Moon, locked away in permanently darkened polar craters. That the Moon was, and has been for aeons, "waterless" has been documented since at least the Apollo Era.

The "news," that the plasticity of the lunar topography as measured by JAXA left little doubt of water playing any significant role in lunar morphology seems secondary to the creation of truly accurate (and stunning) topographic relief maps of the lunar geode.

Detailed Press Release from JAXA
Better maps and the story as picked by Universe Today
And -- LALT data and science from JAXA
Posted by Joel Raupe at 2:04 AM