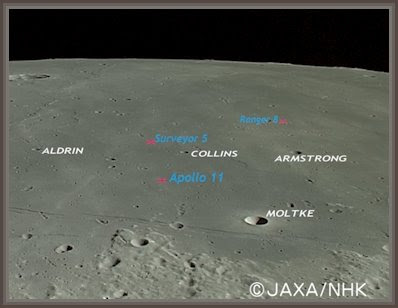 Candidate for the most heavily traveled location on the Moon so far, the south-southwest corner of the Sea of Tranquillity as seen by the HDTV camera on-board the lunar orbiter KAGUYA in 2008. Ranger 8 arrived first, impacting north of the crater subsequently named after Neil Armstrong, followed by Surveyor 5 in September 1967 and finally by Armstrong and Apollo 11 lunar module pilot Edwin "Buzz" Aldrin forty years ago this July.
"Lunar Mark" Tillotson, continuing his daily Today in Astronomy celebration of the IYA2009, today highlights February 20 as the 44th anniversary of the arrival of Ranger 8, impacting the southwest Mare Tranquillitatis 73 kilometers northeast of the eventual landing site of Apollo 11, four years later.
Mark explains it all HERE.
Posted by Joel Raupe at 3:04 PM

Took a lot of work (and paint!) getting the names of the Apollo 11 crew painted on the Sea of Tranquillity like that. You can almost see those labels in a decent scope. (Take THAT, hoax theorists!)

It must be fake: you spelled it wrong!

Thanks for the post. FYI - check the spelling of my name: Tillotson