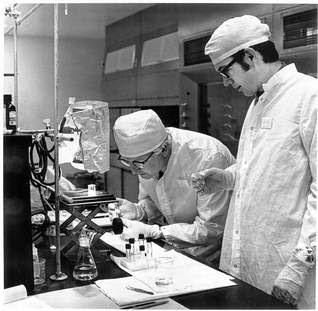 Charles Gehrke, left, and graduate student Robert Zumwalt examine a sample of lunar rock at Jet Propulsion Laboratories in Pasadena, Calif., in the late '60s or early 70s. The moon rocks were brought home by one of the Apollo missions.
COLUMBIA, Mo. - At his first meeting with his biographer, all 90-year-old Dr. Charles Gehrke wanted to talk about was his latest grant proposal to NASA.

Family and friends say that despite his many accomplishments as a researcher and entrepreneur, Dr. Gehrke, who succumbed to lymphoma Tuesday, was never one to dwell on the past.

The longtime MU professor and 1935 Coshocton High School graduat did a lot with his life, hunting for signs of life in moon rocks and helping found ABC Labs, now one of Columbia's largest employers; he continued to add to his résumé until his death on Feb. 10, 2009. He was 91.

As recently as a month ago, Dr. Gehrke was bringing folks to research meetings at ABC Labs' new facility, his son, Jon Gehrke, an orthopedic surgeon in Des Moines, Iowa, said.

His children agreed that out of his 70-year career in science and business, Dr. Gehrke was proudest of two things: his grandchildren and the research he did for NASA.