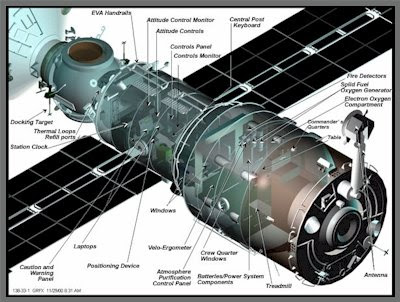 Troubled Zvezda ISS boosters may have reduced station lifetime
UPDATE: James Oberg - MSNBC
Shaking on Space Station rattles NASA (VIDEO)
USA Today is reporting an assessment of an orbital boost performed last month may indicate damage has been done to the structural integrity, and shortened the overall lifetime, of the International Space Station. The boost, performed to aid an upcoming rendezvous with a Progress cargo vessel, was undertaken using the troubled built-in boosters in the Russian Zvezda module which was launched and mated to ISS eight years ago. The engines, which cut-off in mid-maneuver, have a troubled history.
Traci Watson of USA Today writes, "NASA is investigating whether moving the International Space Station last month caused structural damage that could cut the station's useful life."
Russian engineers last month sought to position the station to receive a robotic spacecraft on Feb. 13. The rockets cut off abruptly, rather than gradually, said NASA spokesman Kelly Humphries said. That caused the station to shake more than it usually does, according to daily reports on the station's condition that are posted on NASA's website. The extra jostling may have caused damage to the station that could affect its longevity, according to Humphries.
"Anytime you impart a vibration to the station it has potential implications," Humphries said.
Read the story breaking HERE.
Posted by Joel Raupe at 6:17 PM