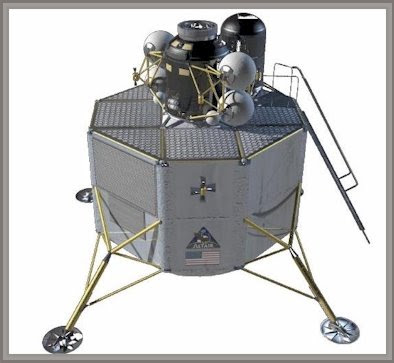 Boeing Company, through its Space Exploration division, submitted a proposal to NASA Thursday, for the Constellation Altair lunar lander design support. (NASA is expected to award multiple contracts this spring.)

If present plans continue, now supported in the Obama administration's FY2010 budget request made to Congress last week, Altair will eventually be launched into Earth orbit aboard an unmanned Ares V heavy-lift booster stack and later provide astronauts with life support for a temporary base or unmanned cargo landings on the Moon.

Like the Apollo lunar module flown between 1969 and 1972m an ascent stage will also return crew to an orbiting Orion CEV that will transport crew back to Earth.

The Altair Conceptual Design Contract calls for NASA-directed engineering tasks to support evaluation of conceptual designs, maturation of the vehicle design, and preparation of products for system-requirements and system-definition reviews.

"Boeing is uniquely positioned to provide great design support now, as well as to support Altair development, test and evaluation when the time comes," said Keith Reiley, lunar lander project manager for Boeing. "Our ability to transition a skilled space shuttle work force ensures we can distribute the necessary expertise where it is needed as NASA transitions from the shuttle program to Constellation. We plan to support NASA with a local core team, enterprisewide specialty engineering experts, and a range of suppliers, including small and innovative high-tech companies."

The Altair lunar lander is envisioned with two stages: The descent stage will house the majority of the fuel, power supplies, and breathing oxygen for the crew. The ascent stage will house the astronauts, life-support equipment, and fuel for the ascent stage motor and steering rockets. The lander will carry a crew of four and be able to stay on the moon for up to six months. Altair will be capable of landing with 15 to 17 metric tons of dedicated cargo. The first crewed flight is scheduled for 2020.

NASA issued its request for proposal on Jan. 28 and will manage the Altair Conceptual Design Contract out of Johnson Space Center in Houston.