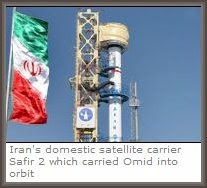 After only twenty-three eccentric orbits of Omid, Iran's first domestically built and launched satellite, the Iranian Aerospace Agency announced plans Thursday to put a crew into space by 2021.

According to Iranian Press TV - "The program's preliminary needs, assessments and feasibility studies have been carried out," Head of the Iranian Aerospace Organization, Reza Taqipour announced on Wednesday.

"China and India managed to send an astronaut to space in a 15 year program. We see ourselves taking the same path, but we hope to reach that goal in a shorter period," he added.

According to Taqipour, the Aerospace Organization had drawn up a comprehensive plan for the project that clarifies the role, which various academic and research institutions must play to carry out a successful space mission by 2021.

On February 3, Iran entered a new stage of its space program by carrying out its first ever entirely domestic satellite launch and sending the national satellite Omid (Hope) into orbit. The research satellite was sent to orbit with the help of a Safir 2 rocket.

Omid is a lightweight telecommunications satellite that has been designed for gathering information and testing equipment.

"After orbiting for one to three months, Omid will return to earth, with data that will help Iranian experts send an operational satellite into space."