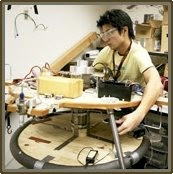 Anthony Ngo
The ambitions of eight students are about to take off in early March with the first free flight test of their prototype lunar lander that might one day be the basis of a space-worthy design.

Since September 2006, the Lunar Entry and Approach Platform for Research on Ground program has been quietly making progress through a collective student effort led by David Barnhart at the Information Sciences Institute.

The ISI is an independent research facility affiliated with USC that handles time-sensitive projects that do not fit within a semester system. The LEAPFROG program is one such project.

The project team’s priority is to create a low-cost, lunar-lander apparatus that can be used repeatedly for different missions without being rebuilt. The apparatus is inspired by NASA’s Apollo lander.

After over two years of work on the Generation 0 prototype, the small-scale version is nearing completion.

“By the second week of March we want to fly this machine,” said Varun Khadilkar, a graduate student studying electrical engineering. “It needs to hover at five meters and land safely and softly.”
Read the Story HERE.
Posted by Joel Raupe at 10:18 AM