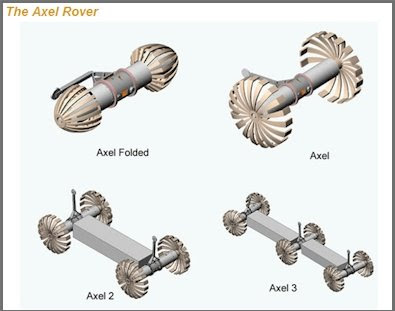 Caption: The Axel Rover Family. Top left and clockwise: (a) Axel in a stowed configuration for flight, (b) an Axel in its surface mobility configuration, (c) an Axel2 with two Axels carrying a single payload module, and (d) and Axel3 with two payload modules.
System: The Axel Rover
Axel, a product of engineering from NASA's Jet Propulsion Laboratory and students at the California Institute of Technology, is designed to explore terrains not previously explorable, said Issa A.D. Nesnas, of JPL's robotics and mobility section. "Also, because Axel is relatively low-mass, a mission may carry a number of Axel rovers. That would give us the opportunity to be more aggressive with the terrain we would explore, while keeping the overall risk manageable."
Axel has a simple design which can make use of different wheel types to help it better get around tough and rocky terrain. It can operate in both upside down and right side up orientations, and it uses only three motors: one to control each of its two wheels and a third to control a lever. This lever in turn controls a scoop used to gather lunar or other planetary material for scientists to study.
NASA's Axel rover can rappel down cliffs
Nino Marchetti
TGDAILY
Posted by Joel Raupe at 12:28 AM