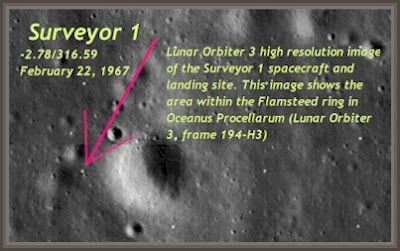 This partially restored scan from Lunar Orbiter 3
is perhaps the only unambiguous image from that series
showing an artifact of what was, at the time still-limited
human activity America's first lunar lander Surveyor 1

The above image is only preliminary restoration of the United States Lunar Orbiter series, which ran concurrent to the Surveyor lander program from 1966 to 1968. It is, however, an image of the first American lander still patiently situated, we hope, in the northeastern Flamsteed Ring in the Oceanus Procellarum. The preliminary restoration was a herculean labor accomplished at the Lunar and Planetary Science Institute with a digital camera, with the help of Charles Byrne.

Now a restoration Byrne very much wanted to see happen is giving us exciting news of their now-daily progress.

Dennis Wingo reported earlier this week an astounding breakthrough in the work underway by the Lunar Orbiter Image Recovery Project. On Wednesday, further progress was demonstrated and the video below were released on the LOIRP "Moonviews" website, showing the actual work underway, bringing unprecedented boulder-sized resolution "framelet by framelet" by the team, making out of the Orbiter mission archives an entirely new mission, producing detail rivaling what Lunar Reconaissance Orbiter investigators hope to accomplish using real-time imagery, rather than photography developed on-board the Orbiters and technology forty years more advanced.
We hope they can get to a framlet from LOIII-194H3 as soon as possible, but, in the meantime, we're astounded, and loving it!

This video shows one of the tape drives retrieving a Lunar Orbiter II image on 24 February 2009. Video: LOIRP.
Posted by Joel Raupe at 2:46 AM