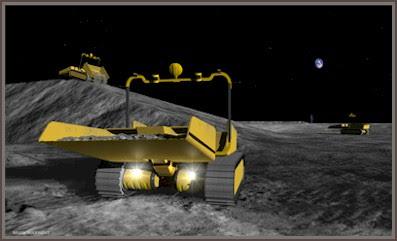 PITTSBURGH—Small robots the size of riding mowers could prepare a safe landing site for NASA's Moon outpost, according to a NASA-sponsored study prepared by Astrobotic Technology Inc. with technical assistance from Carnegie Mellon University's Robotics Institute.

The results will be presented Friday in Washington, D.C., at a NASA Lunar Surface Systems conference co-sponsored by the U.S. Chamber of Commerce and its Space Enterprise Council.

"NASA faces a challenge in planning the layout for its outpost, which is expected to begin operations in 2020," said William "Red" Whittaker, chairman and chief technical officer of Astrobotic and a Carnegie Mellon professor of robotics. "For efficient cargo transfer, the landing site needs to be close to the outpost's crew quarters and laboratories. Each rocket landing and takeoff, however, will accelerate lunar grit outwards from the pad. With no atmosphere to slow it down, the dry soil would sandblast the outpost."

The research examined two potential solutions: 1) construction of a berm around the landing site, and 2) creation of a hard-surface landing pad using indigenous materials.

In the first solution, researchers found that two rovers weighing 330 pounds each would take less than six months to build a berm around a landing site to block the sandblasting effect. A berm 8.5 feet tall in a 160-foot semi-circle would require moving 2.6 million pounds of lunar dirt. Robots this size can be sent to NASA's planned polar outpost site in advance of human expeditions. Astrobotic Technology Inc. has proposed that landing site preparation be provided by commercial ventures.

In the second solution, researchers showed how small robots could comb the lunar soil for rocks, gathering them to pave a durable grit-free landing pad, said John Kohut, Astrobotic's chief executive officer. "This might reduce the need to build protective berms. To discern the best approach, early robotic scouting missions need to gather on-site information about the soil's cohesion levels and whether rocks and gravel of the right size can be found at the site."

Also at Carnegie Mellon, Whittaker is directing the development of Astrobotic's first lunar robot, which has been undergoing field trials for several months. The company's first mission, to win the $20 million Google Lunar X prize by visiting the Apollo 11 landing site and transmitting high-definition video to Earth, is set for December 2010.

Details of the study and lunar imagery are available at www.astrobotictech.com.
Posted by Joel Raupe at 3:50 AM