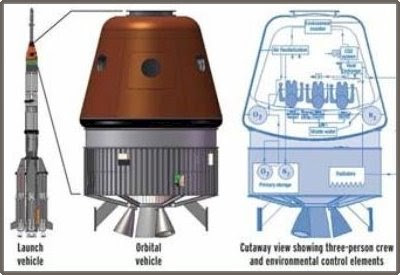 As reported earlier, ISRO has unveiled some details of its plans to launch a crew of three, using the Geosynchronous Launch Vehicle (GSLV) Mark II as early as 2015.
The illustration (FOXNews-SatNews-ISRO) above shows a hybrid variation of the Soyuz and Apollo. The GSLV MII is an assisted version of the Polar Satellite Launch Vehicle (PSLV) ISRO used in 2008 to hoist nine separate satellites into polar orbit and to begin the circuit of maneuvers needed to place Chandrayaan 1 into lunar orbit in November.
Posted by Joel Raupe at 2:42 AM