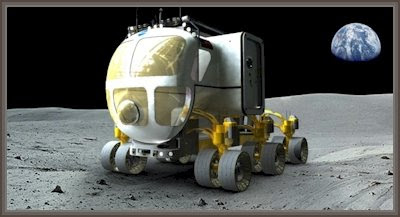 NASA has posted a respectible Flash animation allowing a tour of the Constellation Lunar Electric Rover/Chariot assembly, in available settings including the Washington Mall, the apparent lunar surface, and a virtual showroom/clean room.

NASA EDGE "posted this prior to the Inaugural," and "some of you may have already seen it," but I'm posting it now because I thought it was a lot easier for most busy Lunatics to zip through than downloading and installing Digital Spaces' DARPA/cold rover simulation, which is way more fun, but more useful for designers working to win the Google Lunar X-Prize.

NASA describes it as "one of a new generation of rovers which NASA is currently testing."