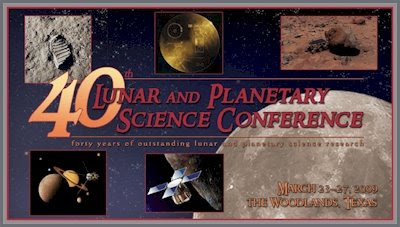 Work has been underway since the close of the 39th annual Lunar and Planetary Science Conference on LPS XL (2009). The Abstracts and studies have been submitted and accepted, and this year's venue reserved to host the swelling numbers of attendees and dizzying schedule of conferences, arising from humble beginnings in 1969. Thousands, last year, nearly burst the Houston hotel conference site where the conference has been held for many years.
The LPSI, a NASA chartered subdivision of the Universities Space Research Association (USRA), is charged as the repository of NASA's legacy of photography and the research inspired by the Apollo Era. With NASA's Lunar Reconnaissance Orbiter, LCROSS preparing soon for launch, and Japan, India and China each with Lunar Orbiters seeking out the Moon's many remaining mysteries, it is believed that a great many discoveries made since 2007 and not yet made public, from active investigation of Mercury, Venus, Earth, Earth's Moon, Mars, and Saturn all presently underway, it may well be awaiting this, the most well-attended of the larger conferences.
The blurred line of overlap between amateur and professional planetary scientist is nowhere more egalitarian then at the annual Lunar and Planetary Science Conference.
The public announcement can be read HERE.
Posted by Joel Raupe at 9:45 PM