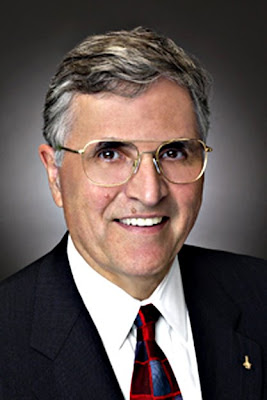 Former U.S. Senator Harrison H. "Jack" Schmitt (R-NM), lunar module pilot for Apollo 17 and the only trained scientist to walk on the Moon, is the latest scientist to be added to the roster of more than 70 skeptics who will confront the subject of global warming at the second annual International Conference on Climate Change in New York City March 8-10, 2009.

The conference expects to draw over 1,000 attendees including private-sector business people, state and federal legislators and officials, policy analysts, media, and students.

Schmitt, who earned a PhD from Harvard in Geology, resigned in November from the Planetary Society, an international non-profit organization devoted to inspiring "the people of Earth to explore other worlds, understand our own, and seek life elsewhere." He is the twelfth person to walk on the Moon; as of 2008, of the nine living moonwalkers, he and his crewmate Eugene Cernan were the last two to walk there.

"As a geologist, I love Earth observations," Schmitt wrote, "But, it is ridiculous to tie this objective to a 'consensus' that humans are causing global warming when human experience, geologic data and history, and current cooling can argue otherwise. 'Consensus,' as many have said, merely represents the absence of definitive science. You know as well as I, the 'global warming scare' is being used as a political tool to increase government control over American lives, incomes and decision making..."

Schmitt will be joined by more than 70 other economists, public officials, legal experts, and climate specialists calling attention to new research that contradicts claims that Earth's moderate warming during the 20th Century primarily was man-made and has reached crisis proportions.

Joseph Bast, president of The Heartland Institute, producer of the event along with more than 30 co-sponsors, explained, "At the first conference last March, we proved that the skeptics in the debate over global warming constitute the center or mainstream of the scientific community while alarmists are on the fringe.