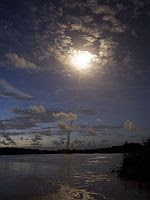 Long gone, apparently, is the day in July 1996 when ESA launch engineers cried, "all is lost," and "it is finished" as their still-born Ariane 5 booster exploded two minutes after lift off, raining toxic fiery debris over the environs of Kourou, just north of the equator in French Guiana.

In considerations of the place the United States holds in launch capability it is too easy, at times, to look down our noses at the dependable, if sometimes frightening experience of being dependent on our Russian ISS partners for "a ride" as the long Space Shuttle experiment winds down to its necessary conclusion.

It's too easy to patronize India, China, Japan and now Iran for their successes at accomplishing the difficult tasks NASA excelled at 40 years ago, in setting useful, full fledged lunar orbiters on years-long missions gathering science where, with only two notable exceptions, we left off in 1972. We have our robust Martian rovers and Cassini, etc., to look upon with pride, but if you look to the south, the European Space Agency might be correctly said to be ahead of us and our new home-grown commercial upstarts. As policy makers endlessly debate whether or not we will be able to afford a new man-rated heavy-lift vehicle which, like the complicated Shuttle, is capable of lifting 25 tons into low-earth orbit, the ESA set and kept an "ambitious schedule" of flying six Ariane 5 lift-offs in 2008, with multiple payloads.

Last evening, the first Ariane 5 lifted off from Kourou and in slightly more than 26 minutes had easily boost four vehicles and reached a speed easily within the range of a comfortable Trans Lunar Injection, traveling 9300 meters per second to place two communications satellites one-tenth of the way to the Moon, in the geosynchronous Clarke Belt.

One Ariane 5 last year launched the remotely piloted Jules Verne ATV which would stay docked at the Zvezda docking port at the International Space Station for six months, using the Russian Kurs docking program that, like the early Ariane 5's, was once notoriously full of bugs but now functions flawlessly. The irony of the ESA's ATV, like similar vehicles under development in Japan and under contract by two American private commercial launchers, looking so much like the multi-purpose Space Tug system NASA proposed prior to presidential and congressional commitment to dream of an "inexpensive" reusable Space Shuttle in 1971 is not lost on many of us who, frankly, "told you so," especially when Columbia turned out six years late and, like its sister ships, never lived up to its intended purpose.

The United States should not rest long on its ancient laurals. The competitive world reward those systems that work, and not "things as we wish they were." It took not just one but two Space Shuttles lost with all hands to finally awake the nation to the need for a purpose of a "space faring nation." Though it will likely not last forever, now, at present we are not number one in the world of space flight. We are falling behind the Europeans.

At Kourou, soon the latest Russian Soyuz launchers will come out of its high lattitude launch facility and begin flights at the equator also, enjoying more than twice the starting orbital momentum of 350 meters per second NASA enjoys at the Cape at launch time and begin operations next to the ESA's equatorial node, boosting their payload capacity and offering more dependable and more frequent launch windows.

While our notional Ares V remains about where Ariane 5 was fifteen years ago, and six, seven, perhaps eight full years before real testing can be done, it won't just be the Russians who will be giving our cargo and crews "a lift" to ISS after the Shuttle's well-earned retirement. When that day arrives, the beginning of our next dreaded "gap," the only vehicle with similar lift capacity will be the Ariane 5.

With our respectable time-tested fleet of Atlas-Centaurs, with the concurrent retirement of the expensive, moody Titan heavy-lifts, for all our talk of "Direct 2.0" as the way to proceed with our "pay as you go" plans to begin "extended activity on the Moon," perhaps its time to consider whether the Ariane 5 is capable, as it surely is, of performing the tasks needed to support the unmanned portion of Constellation?

Any way one looks at the situation, the Europeans have passed us and are further down the road we abandoned when the blueprints for Saturn V were ordered destroyed (by President Nixon).

The Moon looms large in the future economic development plans of China, Russia and India, as the only source of energy capable of supporting the creation of social orders as dazzling as that of the United States. They are not laughing at the idea of mining Helium-3 for forth generation, small scale but ubiquitous fusion power. China, Russia and India all talk of the Moon in thus way openly, while such thing never are even discussed, except by a scientist like Harrison H. Schmitt, who has planned extensively, including to the point of creating environmental impact statements, for the past two decades.

Meanwhile, the U.S. is already on the verge of losing its status as the essential partner in lunar exploration, and having pioneered that New World, seem determined to repeat the mistakes of Spain, who after first launching into the Americas are now retreated inwardly, their empire threatened more by cultural erosion at the hand of ancient enemies, within and without.

After the demonstrations quietly performed by the newer, more ambitious of our rivals in this new Space Age, the United States seems determined to look inwardly once again, heading for a day not very far off when, even after having awoken, and scrambling with purposeful action once again, may find a crowded sky and a missed opportunity, instead dependent on the other visionaries in lands who are succeeding playing the tortoise to our sleeping rabbit.

It need not be this way, of course. We can't claim the Moon and have a difficult time convincing our new adversaries that our belief in ourselves as First Among Equals may be beginning to ware a little thin, when all is said and done, a decade from now.
Posted by Joel Raupe at 6:55 AM