Introduction: We recently reported the discovery of a vertical hole on the Moon [1] in data acquired by the Terrain Camera (TC) and Multiband Imager (MI) on the Japanese lunar orbiter Selenological and Engineering Explorer (SELENE) [2], (nicknamed Kaguya). The 65 m-diameter hole is located at 303.3 °E, 14.2 °N in the Marius Hills region in Oceanus Procellarum on the near side of the Moon. The Marius Hills Hole (MHH) is probably a skylight in a lava tube. Here, we report the discovery of two additional nearly circular deep shafts.

Hole Search Methodology: SELENE TC and MI achieved almost 100% coverage of the Moon during the twenty-one month SELENE mission. To find vertical holes similar to MHH, we extracted the TC data of higher solar elevation angles (SEAs) of > 40° (Fig. 1). At these sun angles, the shadowed portions of these vertical shafts receive less sunlight reflected off of their walls than typical shallow lunar craters causing their shadows to be darker than typical craters. Be-cause TC’s sensitivity is very high, we can detect this difference. We searched for the lowest radiances in the data set and found two new holes in Mare Tranquillitatis and Mare Ingenii.

Mare Ingenii Hole: Using the same search for low radiance data, we discovered a hole in Mare Inge-nii (MIH) at 166.0 °E, 35.6 °S, near a prominent swirl feature on the far side of the Moon (Fig. 1). It has a slightly irregular shape (rounded triangle) with a long axis length of 140 m (east-west) and a short axis length of 110 m (north-south) (Fig. 3). Its northwest rim is a few tens of meters higher than the other portions of the rim. TC observed MIH six times and MI observed it once. Because we could not detect the bottom of MIH, even at the highest SEA (47.4° with TC), we can only place a lower limit on the depth of 90 meters. Like that in Mare Tranquillitatis, this hole is not located on or near a rille.

Interior Temperatures of Underlying Lava Tubes: The temperatures of these cavities are of interest for lunar resources and as special lunar microen-vironments. Based on a thermal equilibrium calculation for the shallow lunar interior, we estimated the temperature at the bottoms of the holes. For the surface albedos around the lunar holes, we used radiance data acquired by TC. Assuming a diffuse (Lambertian) sur-face, the albedos are 3.6%, for the surfaces around MHH, 3.7% around MTH, and 5.2% around MIH (Table 1). The interior temperatures of any lava tubes possibly connected to MHH, MTH, and MIH are estimated to be 18, 19, and 4 °C (Table 1). These tempera-tures may be overestimated because we used the radiance data obtained at SEA < style="font-weight: bold;">Table 1.

Hydrogen Accumulation in lava tubes exposed by skylights: The lunar surface is continuously showered by solar wind protons. Although a small fraction of the protons are implanted into the lunar surface, most pro-tons escape into space. However, the deep holes and their possible connected lava tubes might effectively trap solar wind protons. The surface ages surrounding MHH, MTH, and MIH are 3.5 Ga [1], 3.7 Ga [3], and 3.2 Ga [4]. If the holes opened simultaneously with or just after the formation of surrounding surfaces and the solar proton flux was similar to the current flux: 4 x 10(8)/cm2/sec [5], the integrated amount of the protons inside MHH, MIH, and MIH and their con-nected lava tubes would be 3 x 10(3), 1 x 10(4), and 9 x 10(3) tons, which correspond to water of 3 x 10(4), 9 x 10(4), and 8 x 10(4) tons (Table 2). 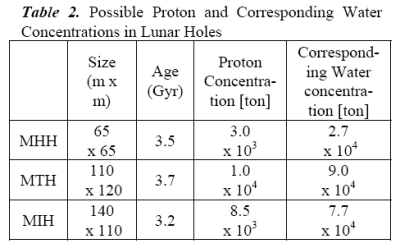 While these abundances are not entirely protected from loss, the vertical shafts and especially any connected lava tubes are protected from loss mechanisms such as sputtering and UV radiation, while preserving local low temperatures.

Observations By Other Missions: Although SELENE impacted on the Moon and ended its mission in June 2009, the Lunar Reconnaissance Orbiter (LRO) is currently observing the lunar surface with a variety of instruments. The observations acquired by LRO instruments will provide much additional information on these lunar holes. For example, the Lunar Reconnaissance Orbiter Camera (LROC) will reveal the detailed structure of the holes, Diviner can investigate the thermal conditions of the holes, and Chandrayaan and Change’1 data will also hopefully provide additional data for these holes. Of critical importance, is to investigate and understand the geological setting of each of the holes, to determine whether they are associated with lava tubes, like MHH, or have another origin. 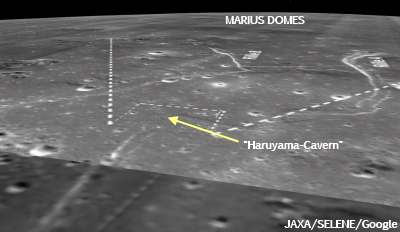 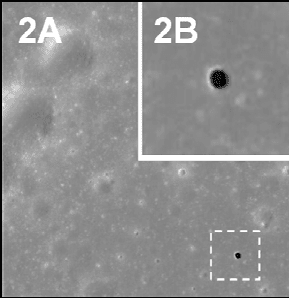 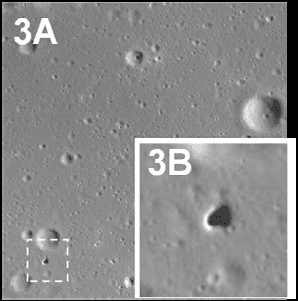 Collapses in the roofs of lunar lava tubes - skylights - have been recognized and correctly interpreted since the late 1960s, and their value as entrances to shelters has been discussed for decades. What is new with these discoveries is the smallness of the skylights, which implies youthfulness and still existing voids (again, already known from the existence of uncollapsed areas between skylights). Vertical shafts such as these will not be useful for entering tubes because of the danger.

You are absolutely dead-on correct, Chuck. The study cited is not JAXA which, unlike ISRO's farm-league, has tended to be more measured in their "original claims." On a global-scale, institutional memory sometimes seems as lacking as it is in politics in the U.S.

(ISRO?, tented Apollo metric cropping of southeastern Serenitatis?) showing a rille bisected by an "uncollapsed roof." It shows too-soon a leap of faith in what seems to my less-trained eye to be a rubble-filled channel within an overall scene long since gardened into a >2 - >3.2 Ga old ruin. Of course, it might be more accurately labeled than I'm giving the writer credit for, and I think it's likely that there are accessible voids, probably far less apparent than the "holes," and perhaps better designated as less-unsafe geologically "stable opportunities" for excavation below the estimated 11 meters or so of regolith needed to attain an Earth-like equivalent of protection from GCR's.

Rather than scaling such a hole in what is probably thin ice, I think these hole are only really useful as evidence for the Moon's under-appreciated, undiscovered aspects. After General Bolden's expression of disinterest in the Moon at Senator Nelson's hearing, this past week, I simply couldn't resist pulling a Percival Lowell, I suppose. His astounding belief in a relatively hospitable Mars, the idea of leap-frogging the Moon's essential lessons to go off into the Solar System unarmed with the knowledge we so obviously need to gain there betrayed what seemed to me like performing brain surgery as a first-year med student.