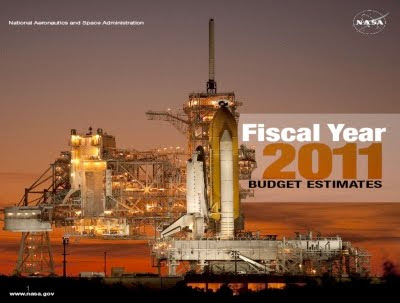 The release of the new proposed budget for NASA has unleashed a blizzard of news articles and commentary. The administration proposes to terminate Constellation, the agency effort to design and build a new space transportation system to carry people to low Earth orbit and beyond. In its place, they plan to let contracts with several companies to provide orbital launch and spaceflight services, both as transport to ISS and to “destinations beyond LEO.” This major change in the agency’s business model follows in the wake of last summer’s Augustine committee report, which concluded that NASA’s “program of record” to return to the Moon and beyond was inadequately funded and possibly, misdirected as well.

The Augustine “Flexible Path” was an architecture designed to take people beyond LEO, but to low gravity targets: L-points, near-Earth asteroids, and Phobos and Deimos, the asteroid-like moons of Mars. The idea behind that concept was two-fold. First, it was a way to send people into deep space without the very high programmatic expense of developing a lunar landing spacecraft. Given that Constellation is significantly over budget, cost control is certainly an issue. The second motivation for FP was the feeling (not explicitly stated in the report, but clearly implied) that the agency plan for lunar return was largely a repeat of the Apollo experience of 40 years ago. The strength of this impression varied among the committee members, with some thinking that the chosen architecture was simply the wrong approach while others questioned the value of going to the Moon at all. The new proposed budgetary direction seems to follow the Augustine Flexible Path (FP).

I have previously discussed what I perceive as the most significant problem with FP, namely, that it is activity without direction. The administration’s budgetary version of this path confirms this perception. Much verbiage is thrown around about multiple missions to all sorts of destinations, blazing new trails with new technology, trips to Mars that last weeks instead of months, and “people fanning out across the inner solar system, exploring the Moon, asteroids and Mars nearly simultaneously in a steady stream of firsts.” But nowhere in the budget documents or agency statements is there anything about the mission that we are undertaking. So we’re going to an asteroid. What will we do there? Why are we going there? What benefit accrues from it?

The Vision for Space Exploration (VSE) of 2004 not only laid out a clear path, but also described exactly why such a path was being taken. It is not a repeat of the Apollo experience. We go to the Moon to learn how to create a sustainable human presence in space. We do this by experimenting with and learning to use the material and energy resources of the Moon to create new space faring capability. These skills enable us to build a space transportation infrastructure that allows routine access not only to the Moon, but all of cislunar space (where our space assets reside) and the planets beyond. All of this activity is to be accomplished under the existing budgetary envelope; as there is no deadline, we trade time for money.

Many conflate the VSE with Constellation, the agency’s program to build the Ares launcher and Orion spacecraft, but they are different and distinct. The former is a strategic direction; the latter is an implementation of that direction. This is not some academic distinction; it goes to the essence of the current debate about NASA and the space program. Virtually all of the argument and debate about our future in space has been about means rather than ends. Launch vehicles, spacecraft, and architectures have been grist for the mills of the space blogosphere. Beyond a vague notion that people should “move into the Solar System,” the purpose and meaning of that movement has been articulated much less often. Partly that’s because different people have differing notions of what those motivations should be – science, settlement, curiosity, and technical innovation all have their adherents. But if you do not clearly understand what your mission is, you are not likely to successfully implement it.

The VSE was a clear strategic direction. It not only identified the path forward, but also the specific activities that would enable that path to be followed. The new budget outlines the means (new commercial launch and transport) but not the object of our space program. But more critically, it discards the clear and practical direction of the original VSE. Before the new budget, we knew exactly where we were headed and why: a return to the Moon to learn how to live and work productively on another world. Now, all we know is that at some point in the future, we will somehow go somewhere to do something. Or other.

I wrote recently about a variant of the Flexible Path architecture outlined at the blog Vision Restoration. I think that this approach has a lot of merit, but suggest one critical modification: it does not have a statement of the mission. The VSE in its original guise should be stated up front and made a clear and unalterable part of the architecture. If during the course of the program the implementation somehow falls short, change the implementation, not the mission. The failure to do this in the Constellation Program led us into a blind alley of cost and schedule overruns, the Augustine committee, and now, cancellation.

This new policy will increase NASA’s natural tendency to engage in organizational “Brownian motion.” We are already seeing agency leaders call for new studies to determine what will be done at the (so far unspecified) new destinations. The current program looks upon itself as a transportation architecture; the activities undertaken at any given destination are irrelevant. The new “direction” outlined in the budget request is similarly focused on means (e.g., commercial launch and transport) rather than ends (e.g., What will humans do at Earth-Sun L-1?). And it will likely come down the same path, as indeed it appears to be starting to. NASA as an organization will adjust to this; after all, viewgraphs are easily changed and mission studies easily re-written. But what about the aerospace industry? They find it very difficult to pivot on a dime when the direction changes.

I’ve often written about how I think the VSE ought to be implemented and have found the existing program of record wanting in several respects. But at least it aimed in one direction. We need a program plan that gets us beyond LEO using small, incremental, cumulative steps and the new model promises to do just that. But small, incremental steps taken in random directions yield uncertain progress.

What is your mission? It’s not just the most important thing; it’s the only thing. NASA forgot that during the last 6 years. Now, the White House has joined them.
Posted by Joel Raupe at 9:56 PM

Everyone has their favorite way of using the internet. Many of us search to find what we want, click in to a specific website, read what’s available and click out. That’s not necessarily a bad thing because it’s efficient. We learn to tune out things we don’t need and go straight for what’s essential.
www.onlineuniversalwork.com

I am really happy to read posts related to space and its mission.truly inspiring posts. Thanks a lot for sharing.
regards
digital elevation model data processing
<a href="http://www.sblgis.com