Riccioli: bombardment, volcanism and tectonics-all in one 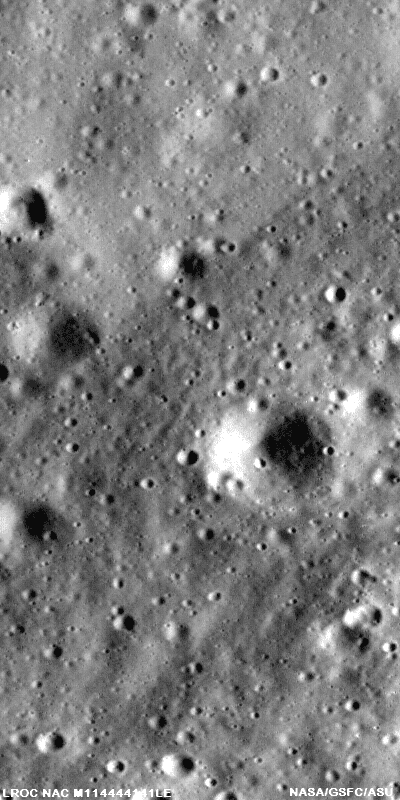 High-resolution LROC view of part of the floor of Riccioli Crater, near the center of the Constellation region of interest. The view is centered on the boundary between a spur of the crater's central peak materials (lower right half of the image) and volcanic lava flow deposits (upper left half). The central peak materials are rougher and show a faint pattern of lines running NE-SW, suggesting that this terrain, like much of the rest of the crater, was scoured by ejecta from the younger Orientale impact basin to the southwest. Part of NAC frame M114444141LE, image width is 500 m and north is up [NASA/GSFC/Arizona State University].
Jim Bell
LROC News System

Riccioli Crater is named after Italian astronomer and Jesuit priest Giovanni Battista Ricciolo (1598-1671) who, along with colleague Francesco Maria Grimaldi, named and catalogued many of the Moon's larger craters, including the prominent crater Copernicus. Riccioli had a diverse career in astronomy, physics, geography, and of course, religious studies. Thus it is fitting that the crater bearing his name exhibits such a rich diversity of landforms and processes.
Riccioli Crater, the large circular feature filling most of this image, is an approximately 140 km diameter impact crater just south of the equator along the Moon's western limb. The crater has been selected as one 50 special regions of interest for possible future human and robotic exploration of the Moon. This LROC WAC mosaic from frames M117976140ME and M11798970ME shows most of the crater's floor and rim. North is up and the width of this mosaic is 125 km [NASA/GSFC/Arizona State University].
The floor, rim, and ejecta blanket of Riccioli Crater exhibit steep tectonic fractures, dark volcanic lava flows and rilles (lava-carved channels), and numerous highland-mare contacts. In addition, much of the region in and around Riccioli appears to have been "sculpted" into long linear patterns. This northeast-to-southwest trending series of linear markings are part of what lunar geologists call the Hevelius Formation, which was formed by rocks and other impact debris ejected by the younger, giant Orientale impact basin (centered some 750 km to the southwest) draping and scouring the surface. As ejected debris from Orientale buried and flowed over older terrain like the rocks here in Riccioli and encountered obstacles like the crater rim and central peak, it sometimes changed direction or stalled and bunched up, causing many of the beautiful textural patterns seen in the LROC images and mosaics. In this regard, Riccioli would be a fascinating laboratory to study in detail the ways that giant impacts can effect a planetary surface over great distances. 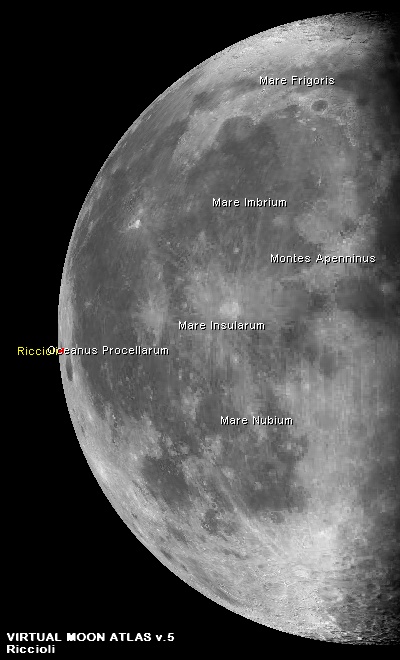 Riccioli has also been flagged as a potentially good site for astronomical observations. For example, most of the sky would be visible from telescopes placed at an outpost so close to the lunar equator. Because the region is near the limb of the Moon as seen from Earth, the Earth is always low on the horizon and thus would not be a major impediment to astronomical observations. In fact, having the humans home planet still in direct line-of-sight could be advantageous for communications and operations.
Explore the Riccioli crater Constellation region of interest for yourself and look at previously released images showing spectacular views of Orientale Basin and another example of a floor-fractured crater.
Posted by Joel Raupe at 6:45 AM