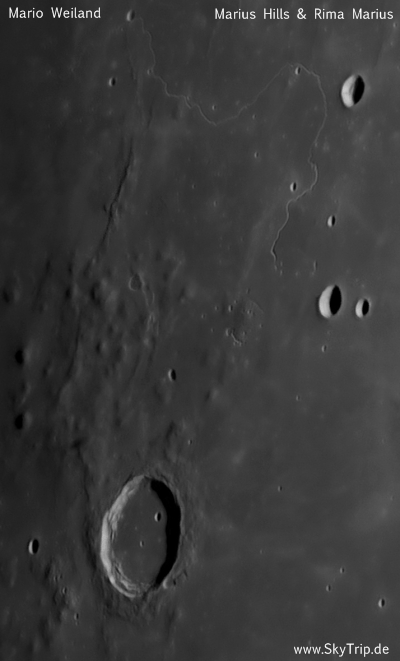 Remnant tubular structures or tunnel-like formations from lunar volcanic flows in the past, which extend a couple of kilometres on the moon’s surface, could serve as ideal landing as well as human settlement sites for future lunar missions, including Chandrayaan-II, according to some new findings from India’s Chandrayaan-1.

These findings were reported on Monday at the Sixth Chandrayaan-1 Scientific Meeting being held at the Physical Research Laboratory (PRL) here.

Data from the Terrain Mapping Camera (TMC), one of the Indian instruments on-board the spacecraft, has revealed one such volcanic tube in the Oceanus Procellarum area of the moon (central longitude 58.317 deg. W and latitude 14.111 deg. N). The remnants of volcanic tubes on the moon whose roofs have capsized and a trench or valley is created is called a rille system, which is a groove or long narrow depression on the lunar surface. The volcanic tube identified by the TMC comprises two cobra hood-shaped rilles, the longer one measuring 3.65 km in NE-SW direction and the smaller one measuring 0.73 km. The interesting feature is that these rilles seem connected by an intermediate stretch of a two km-long and 360-metre-wide uncollapsed portion (see picture), which seems to be the roof of the lava tube that did not collapse for some reason, said A. S. Arya of the Indian Space Research Organisation’s Space Applications Centre (SAC), Ahmedabad, who described the findings at the meeting.

More significantly, the uncollapsed part is very close to the surface, only 160 metre below. Its hollow interiors could be safe spots for lunar habitation, or even parking lunar landers for protection from the harsh impacts of interplanetary material, meteorite showers, solar wind and radiation. “For future missions aimed at creating permanent base stations and human settlements on the moon, there is a need to identify such locales that have survived the onslaught of the past impacts and would provide safe shelters to human beings on the moon,” Dr. Arya said. For instance, the Japanese mission Kaguya discovered a vertical hollow structure, but that is not suitable for habitation, Dr. Arya said. In a horizontal tubular structure, however, any lunar vehicle can just move along the rille into the tunnel structure for safe parking.

But the TMC findings could even become the starting point for identifying suitable locations for immediate missions such as Chandrayaan-II, which plans to land two lunar rovers, said M. Annadurai, Project Director, Chandrayaan-1 and Chandrayaan-II. Chandrayaan-II has set itself the ambitious goals of sustaining the two rovers in the harsh lunar environment for as long as six months. All previous missions have landed in the sunlit area and have not been able to survive beyond a few weeks. “We need to see how Chandrayaan-1 data can be used from an engineering point of view in terms of site terrain information and soil interactions to know where to land our rovers from this perspective,” Dr. Annadurai said.

Like Chandrayaan-1, its follow-up mission, which is likely to be flown during 2012-13, will also focus mostly on the higher lunar latitudes, Dr. Annadurai said. “From an engineering point of view, we need to look at the rovers spending longer night hours. For optimal power utilisation, they will function in the hibernation mode when there is no sunlight for generating power,” he said. “So a suitable site could be the edge of some crater or a site near such volcanic tubes where they can retreat for hibernation. But a cross comparison of data from different Chandrayaan-1 experiments can tell us much more than just the TMC data. And such a trend has been evident at this meeting.”

With Russia already part of the project, Chandrayaan-II is also likely to have international collaboration, especially with all the principal investigators of the various experiments keen on carrying the work forward by collaborating among themselves in the future.
Posted by Joel Raupe at 1:24 AM

The name of the paper is The Hindu not the Hindi!

Also, the more interesting news is about the new type of rocks found on the far side. It'd be interesting to know more.

Thanks, Pradeep. I'll see to it that mistake is corrected.

Yes, the differences between the Far and Near Side seem to get more delineated rather than less, as we continue to learn more, and in a flood of data after such a long dry spell.

The two pre-releases of LRO data are concentrated on what seems, at first, to be an area of lesser interest, to some- from Orientale to the central meridian on the Far Side. As we've taken time to dip into that stream, however, there's much to make those large-scale photographs worth the strain.

I will keep an eye peeled for more. Thanks. - Joel R.