Water and More: An Overview of LCROSS Impact 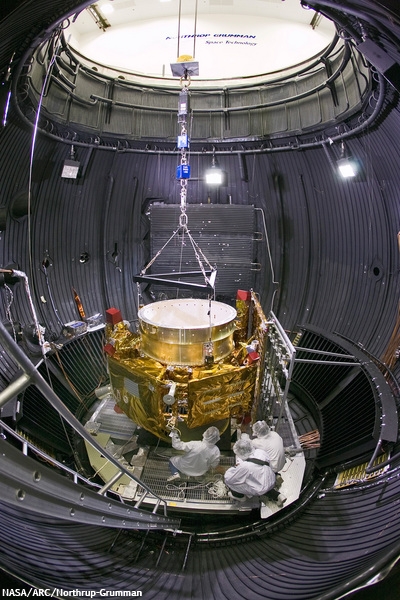 -
The LCROSS spacecraft entering thermal vacuum testing at Northrup Grumman in 2008. Months after the LCROSS impact in October, Anthony Colaprete and other LCROSS investigators will present additional details of science results at next week's 41st annual Lunar and Planetary Science Conference in Texas.
Colaprete, et.al., and the LCROSS Team, NASA Ames Research Center, The Citadel, University of California Santa Cruz, Brown University, University of Idaho and University of Texas at Austin
Introduction: Interest in the possible presence of water ice on the Moon has both scientific and operational foundations. It is thought that a variety of processes could be contributing to the accumulation of water within polar cold traps, including impacts of comets and meteorites, the reaction of solar protons with lunar soil to form water, and outgassing from the moon’s interior. One possible process involves the migration of water in the Moon’s exosphere though ballistic trajectories with eventual capture of these molecules in persistently shadowed polar cold traps. Recent discoveries of a veneer of hydroxyl and adsorbed water in sunlit regions of the moon may support this process [1,2,3]. The form and amount of water presumably associated with the hydrogen concentrations at the poles, as observed by Lunar Prospector (LP) and Lunar Reconnaissance Orbiter (LRO) may represent one end-state in the chain of processes that involve water on the moon. The LCROSS mission’s goal was to identify the source of the elevated hydrogen at the poles and provide a ground truth with regards to the total concentration. Verification of the form and amount of hydrogen can constrain models of the impact history of the lunar surface and the effects of meteorite gardening, photo-dissociation, and solar wind sputtering. With the combined observations of LCROSS, LRO and others it is possible to evaluate the global water distribution and provide a quantitative basis for studies of the Moon’s history and a test of current theories on the form and distribution of lunar hydrogen [4]. 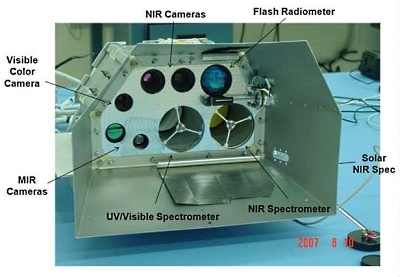 Figure 1. The LCROSS Payload Observation Deck and its eight nadir viewing instruments (an additional solar occultation spectrometer is to the side). 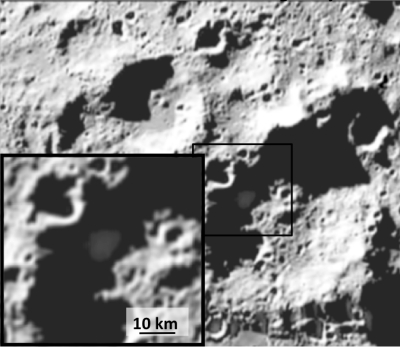 Figure 2. Image of the LCROSS impact ejecta cloud as seen in the visible context camera. Inset shows the ejecta cloud expanding to fill the shadowed region targeted at the bottom of the crater Cabeus [NASA/ARC].
The LCROSS Mission: The primary objective of the Lunar Crater Observation and Sensing Satellite (LCROSS) was to confirm the presence or absence of water ice at the Moon’s South Pole. This mission used a 2300 kg kinetic impactor with more than 200 times the energy of the Lunar Prospector (LP) impact. The impact was achieved by steering the launch vehicle’s spent Centaur upper stage into a permanently shadowed polar region. The Centaur is guided to its target by a Shepherding Spacecraft (S-SC), which after release of the Centaur, flew toward the impact plume, sending real-time data and characterizing the morphology, evolution and composition of the plume with a suite of cameras and spectrometers (Figure 1). The last S-SC image and spectrum was timestamped at ~1.9 seconds prior to its impact, at a altitude of approximately 5 km from the lunar surface.

Impact Target: The specific impact site for LCROSS depended on the exact launch date for LRO. The launch date of June 18, 2009 resulted in a 112 day cruise and an impact at the South Pole on October 9. The impact site was selected based on a number of requirements including solar illumination of ejecta, association with observed hydrogen, visibility to earth, and target properties (e.g., slopes and roughness). The targeting capability of the LCROSS S-S/C, ~1 km (3s), allowed for a precise selection of impact point. In the original plan the final target selection was to be made 30 days prior to impact. It was at this point Cabeus A was selected. However, a that time, because the LCROSS trajectory did not require an anticipated trajectory correction, the final targeting maneuver was pushed off to two weeks prior to impact. This extra time was important as it allowed further consideration of LRO observations, coordination with LRO to observe the impact, and verification of LCROSS instrument health closer to the actual impact time. These considerations resulted in a move of the target from Cabeus A to Cabeus. The principle rational for this move was significant level of confidence, both in LP and LRO data, that the Cabeus target held significant amounts of hydrogen.

The Impact: On October 9, 2009 at approximately 11:31:19 UTC the Centaur impacted within about 150 meters of the planned target. The impact resulted in an ejecta cloud that was observed to expand to over 10 km across and to a height of more than 1 km above the surface (Figure 2). All instruments on the LCROSS SSC performed well and a wealth of data was collected.

All portions of the impact, including the flash, ejecta curtain and resulting crater, were observed. From the data set the presence of water was confirmed as was the presence of several other volatile species. In this presentation an overview of the results will be presented.