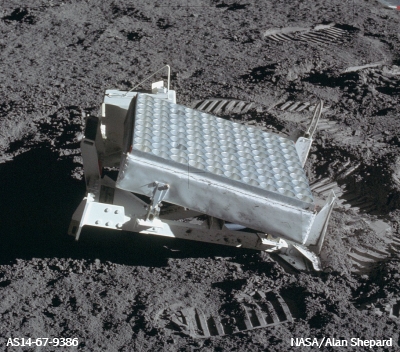 February 5, 1971 at Fra Mauro (3.65° S, 342.53° E). The Apollo 14 Laser Ranging Retroreflector experiment, photographed by Cmdr. Alan Shepard. The Apollo LLR's, at Tranquility Base, Fra Mauro and a third with four times the surface area at Hadley Delta, have long been the last Apollo experiments still underway. Designed to return reflected laser light in precisely the direction from which it arrives, vastly improved lasers and detector sensitivities on Earth in the years since have allowed scientists to gauge the Earth-Moon distance with micro-precision, and tantalizing close to limits determining the "locality" of physical laws on cosmological scales [NASA/ASJ].
Joel Raupe
Lunar Pioneer

The Apollo 12 lunar landing of November 1969, in walking distance from Surveyor 3, demonstrated accumulated levels of understanding of the Moon, lunar navigation and vehicle capability that was truly stunning. Some hold the engineering accomplishment to be as great a Cold War victory as the first landing clearly was four months earlier. Like so many other unexpected discoveries in space exploration, however, new lessons and wisdom took on a greater importance with the passing of time.

Though Conrad and Bean succeeded also in collecting the camera and shovel arm from the unmanned Surveyor 3, learning what those artifacts could tell us about the Moon as a "long duration exposure facility" was not a NASA priority. The Final Reports in 1970 (NASA-CR-121796) indicated after careful examination of Surveyor 3's components that what slight "weathering" there was to be found on camera was wholly a result of the blast of Apollo 12 descent engine. But, first actually locating and then landing the lunar module precisely where Surveyor 3 was situated (there were no orbital photographs of the spacecraft in situ) was pretty astonishment by itself. No one was cautious of any evidence of an active fallout of electrostatic dust on the Moon in 1969.

Though there had been hints of a gossamer-thin migratory dust phenomena happening on the Moon, Apollo 8 crew sightings from orbit and night time Surveyor images, the concerns of the time were solar and cosmic radiation, and micrometeor bombardment. Evidence at the Apollo astronaut's feet and on their spacesuits (and in their eyes and noses) of the voluminous accumulations of dust everywhere on the Moon was (not incorrectly) thought to be the end result of extremely slow processes.

The evidence for the presence of a dusty lunar exosphere has mostly been discovered to explain gathering evidence, not all of it gathered on location. Twenty years ago great (but very thin) trailing clouds of silicon and potassium ions, among the more easily spectographically-detected dusty elements. These were composed into photographs showing the Moon orbiting Earth in a cloud of it's own bombardment.

The forty years since Apollo, occasionally punctuated with influential, if rare (until 2007), lunar probes like Lunar Prospector, gave lunar and planetary scientists a lot of time and new evidence to ponder. Perhaps the length of time itself allowed many theories to be shaken out and ultimately proven amazingly accurate.

Departing tests of instruments now used by Cassini at Enceladus to detect water were aimed at first light at the Moon, precisely because its bone-dryness was believed to present a sold baseline of zero water. The unexpected detection of water there, coincident with daily cycles of sunlight, has now become part of the context of evidence old and new that verified the astounding conclusion that some areas of the lunar surface may be wetter than Mars (relatively speaking).

In May 2012 NASA Lunar Atmosphere and Dust Environment Explorer (LADEE) should have the capability needed to improve our understanding of processes related to the charging of lunar dust particles and the implantation and presence of water on the Moon, the interaction of solar particles and energetic photons (including neutral hydrogen) that polarize the smallest grains on the Moon's immediate surface. Gardened over, roughly every 2 million years predominately by micrometeorite bombardment, submicron sized flecks are repelled by opposing charges into ballistic trajectories as high as the orbit forty years ago of Apollo's command and service modules.

Though posing little or no danger to orbiting spacecraft, the range of hazards that lunar dust poses to sustained surface operations, whether manned of unmanned, are manifold. The susceptibility of the smallest of these shards to electrical charging, their stubborn clinging to seals and skin, for example, is both the source of their danger and perhaps their mitigation.

The forensics done on the Surveyor 3 parts offered us lessons. In the near future, if anything is to be learned about fallout of lunar dust from an examination of human artifacts a degree of care must be taken beyond the mission goals of Apollo 12. If you want to approach and examine Apollo 11's descent stage, for example, the arrival of Apollo 12 near Surveyor 3 showed any similar arrival near near Tranquility Base should be from well over the horizon, and more. Calculations show at least some of the famous dust raised at the arrival and departure of Apollo's lunar modules must have attained great altitude, even escape velocity.

Very little would be needed to disturb a forty year record of dusty "precipitation."

It is thought that the migratory dust circling the Moon continuously, with its wave crest directly behind the longitude of sunrise, is related to the forces that lead to implantation of volatile molecules like hydroxyl and water. The path of the oppositely charged and neutralized dust fallout, it's cycle of return to the surface, may rain in one direction during the equivalent of a lunar winter and predominate in the opposite deviation from westerly during a lunar summer.

Dust fallout cycles may then be the source of the criss-crossed "elephant skin" patterns seen on lunar high places and elsewhere.

Tied as the phenomena is to solar-induced charging, the pattern of the Moon's dusty cycles of levitation and fallout are attenuated during the Moon's monthly transit through Earth's magnetotail. Something similar may be true, on a smaller scale, affecting levitation and subsequent fallout of lunar dust in and around especially strong crustal magnetism. This might perhaps then be a solution to the mystery posed by a presence of brighter surface albedo (low optical maturity) characteristic of lunar swirls within these"magnetic anomalies" whose origins otherwise speak of greater age than high albedo would indicate.

And now, very recently, evidence comes to "light" that fallout from the very thin, neverending lunar dust storm is accumulating with a greater speed than anyone may have imagined.

When a powerful laser is aimed at the Moon from Apache Point in New Mexico, the thin beam consisting of many hundreds of billions of photons spreads out to at least two kilometers in width during the second and a half needed for it to center on Apollo's retroreflectors, 400,000 kilometers away. The small sampling of that beam reflected back is literally counted in single photons by the time it returns back to New Mexico.

After accounting for things like today's more accurate photon detectors, more powerful and accurate lasers, more suitable laser wavelengths and a more powerful telescopes than originally used for this purpose at MacDonald Observatory in Texas, the photon count should be measurably improving, just as it has been. Still, something doesn't quite add up, and one investigator thinks he knows why.

"Tom Murphy from the University of California, San Diego, who leads one of the teams at the Apache Point Observatory in Sunspot, New Mexico, thinks the mirrors have become coated in moon dust. "The lunar reflectors are not as good as they used to be by a factor of 10," he says."

An article in New Scientist February 15 takes up the story now, illustrating better also why measuring the distance from Earth to the Moon, and the retroreflectors left behind on the Moon have lately taken on a new importance to cosmologists.
Recommended Article in New Scientist, HERE.
Posted by Joel Raupe at 1:22 AM