Near the Summit of Malapert Mountain 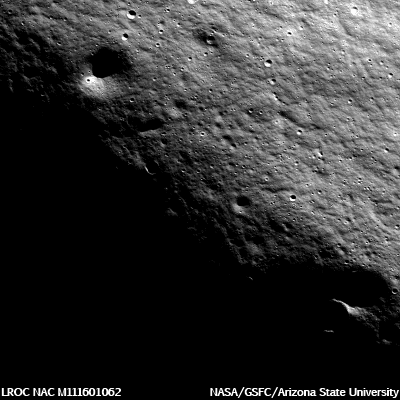 The lunar highlands exhibit rhythmic patterns thought to result from slow, downslope creep of the loose regolith (soil). These subtle patterns are most easily seen when the Sun is low to the horizon. Image is 2400 meters wide, north is to the top [NASA/GSFC/Arizona State University].
Mark Robinson
LROC News System

What exactly is the cause of these intersecting lines, sometimes informally known as "elephant skin?*" LROC is now collecting the data to allow scientists to model different theories. These include seismic shaking and temperature cycling. Most likely both mechanisms play a role, but which mechanism is more important?

Malapert mountain is very ancient, and thus has well-developed regolith (soil). Malapert is always seen at low Sun due to its latitude (86° South) near the south pole, giving this texture its striking appearance. 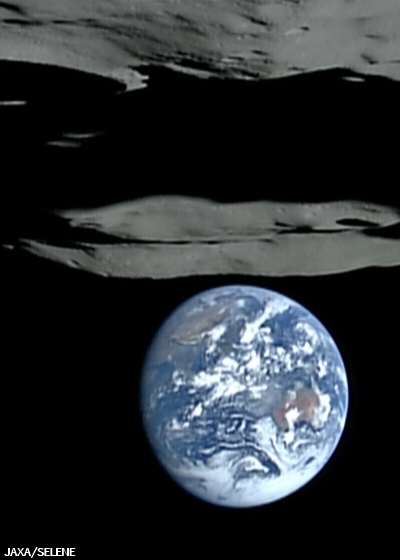 A new take on the famous HDTV image returned by Japan's first lunar orbiter Kaguya (SELENE-1). The Earthset over the Moon's southern extremes is presented "right side up" with cameras aimed at a nearly-Full Earth (from dawn over Iran to sunset over New Zealand) as the Kaguya quickly orbits away north, over South Pole-Aitken Basin and the Moon's far side. Malapert Mountain is part of the SPA basin's rim, the largest and oldest known impact basin on the Moon, and the massif occupies all of the horizon in this view. The lunar south pole is on the shadowed portion of 10 km-wide Shackleton, at upper left. Malapert has long been considered a favorable site for a permanent Moon base or as a location for automated support facilities because the high crest experiences almost constant sunlight on some portion of it's length. The treasures here are in the shadows.

[*Ed. Note: Recent study of the lunar exosphere suggests the "Elephant Skin" phenomena might also be understood as an artifact of dust fallout, as a remnant of daily cycles of the migration of electro-statically charged, sub-micron-sized lunar dust.

A recent "thought experiment" suggests the fallout of dust "precipitates" along regular patterns, subtly changing direction - more slowly at the extremes of seasonal cycles, thus predominately redepositing in one of two directions with higher probability than otherwise, and changing more slowly, of course, as new fine-grain dust is "gardened" from the immediate surface over an estimated 2 million years. Originating as a byproduct of the tenuous lunar exosphere, so the thinking goes, it then is affected by quakes, slumping and thermal differentials. Though such patterns must obviously change on a longer time scales, these would still depend on regular and very ancient cycling of the angle of solar incidence and interactions of the lunar surface with Earth's magneto-tail, etc. A pattern of dust fallout would seem likely to predominate within these cycles at those times when the alteration of solar wind incidence slows and reverses. Over a two millions years long time scale, a pattern, it is supposed, would tend to result as more dust accumulates first in one direction and then in another.

This hypothesis has some big holes, in my opinion. It doesn't explain the predominance of these patterns on the Moon's higher elevations, for example (unless, as was suggested by the results of the surface solar wind experiment of Apollo 17, lunar dust migration also occurs along nearly horizontal directions, in addition to ballistic paths, during at least some part of a still-incompletely understood lunar dust cycles).

Nevertheless, the idea of taking the cycling of the lunar exosphere into account when trying to explain the "Elephant Skin" patterning does seem worthwhile. - Joel Raupe]
Posted by Joel Raupe at 8:59 AM